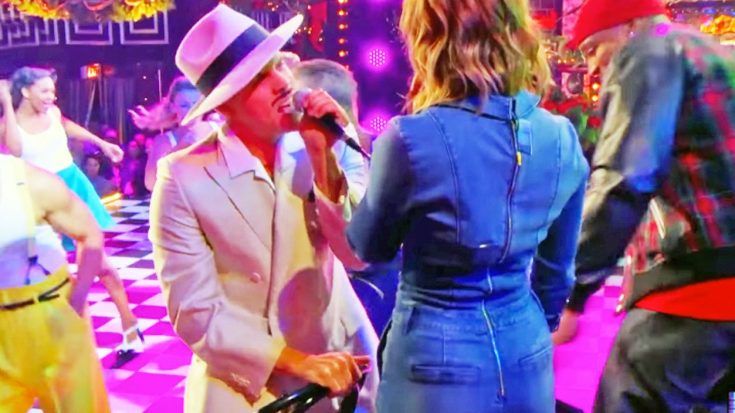 Country singers Dustin Lynch and Cassadee Pope faced off in hysterical lip sync battle with a shocking ending you won’t see coming. While both singers are each respectively powerful performers, in battle, only one can take home the gold.

First up at bat was Lynch, who went into the competition with a staggering determination to take down his tour mate. The “Seeing Red” singer rocked a thinly lined mustache across his face and an excess of swagger for a sensual performance of “Mambo No.5.” The performance was decked out with an army of back-up dancers, slinking around the country singer before he made his way over to Pope for a hysterical chair dance.

While his performance was definitely a tough act to follow, Pope brought her A-game and went back to her rockstar roots for a delivery of Panic! At the Disco’s 2005 smash hit “I Write Sins Not Tragedies.” Pope’s performance kicked off with her in bed wearing a nightgown, before one of the dancers pulled her out of bed and ripped the conservative dress right off her.

In a last ditch effort to take down Lynch, Pope shocked the crowd by bringing out Panic! At the Disco’s very own Brendon Urie. While her attempt was more than admirable, Lynch inevitably took home the belt.

You can watch their hysterical performances in the video below!