By Jennifer Pernicano on March 27, 2017
Advertisement 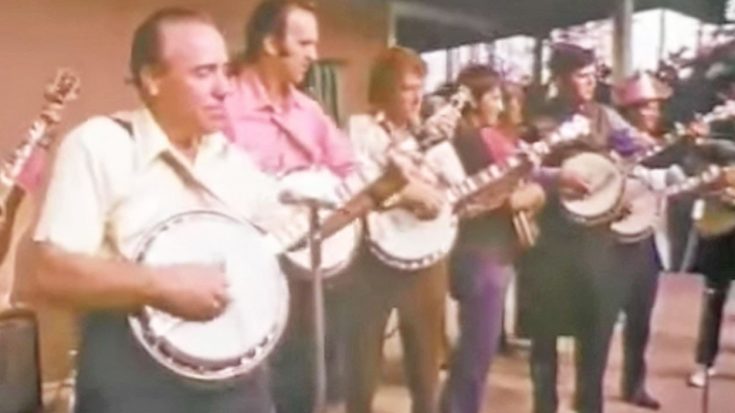 The word “legendary” goes hand in hand with the name Earl Scruggs. After all, he did make the three-finger banjo picking style so popular, that people named it after him!

Scruggs began his legendary career as the banjo player in The Blue Grass Boys, Bill Monroe’s band. He gained a lot of attention for his unique style of playing and eventually ventured out with fellow bandmate Lester Flatt to form the band Flatt & Scruggs.

They quickly became the most famous bluegrass band of all time with hits like “Crying My Heart Out Over You”, “The Ballad of Jed Clampett,” and “I Still Miss Someone.”

Their signature hit, though, is “Foggy Mountain Breakdown,” which was first released in 1949 and is now considered a standard in the bluegrass repertoire. In the video below, Scruggs is at the Camp Springs Bluegrass Festival surrounded by many banjo players.

Scruggs kicked off the performance with his mind-blowing talent. The second he began playing, the audience erupted into applause. The look on his face is priceless, too. He is clearly having the time of his life up there!

After about a minute of Scruggs taking the lead, he took a step back so one of the other many banjo players could have the spotlight. Each banjo player took the lead for a few bars of the song and then handed the reigns off to the next person. It was truly a sight to see!