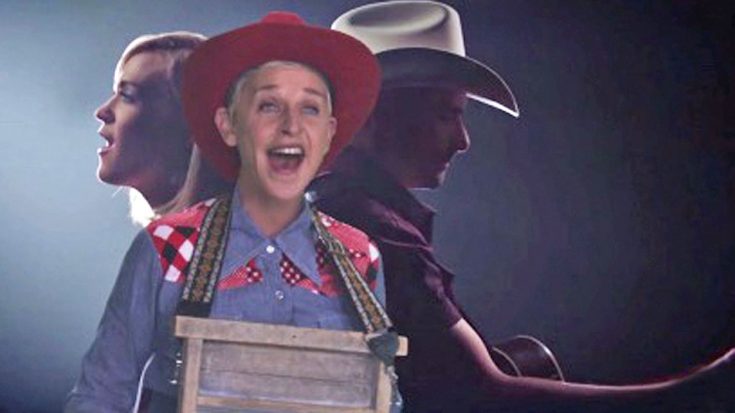 Like the rest of us, talk show host Ellen DeGeneres is excited for the 50th CMA Awards to air tonight (November 2). The anticipation has been building for months, especially following the release of the epic mashup, “Forever Country.”

Since then, the CMA has helped build up the excitement by releasing short promos featuring some of today’s biggest stars. As they stood back to back under a single spotlight, artists such as Keith Urban and Miranda Lambert sang parts of classic country songs, connecting the old and the new.

One of the most breathtaking promos the CMA released was one between co-hosts Brad Paisley and Carrie Underwood. The clip features the two talented artists singing their respective parts in “Forever Country,” with Paisley singing “On the Road Again” and Underwood singing “I Will Always Love You.”

Leading up to the CMAs, DeGeneres decided to give Paisley and Underwood’s duet a funny twist. In her own promo for the awards, you can see Paisley and Underwood singing with an unidentified third person wearing a cowboy hat beside them. It turns out that person was DeGeneres, clad from head to toe in country-themed clothes.

But the little clip took a hilarious turn when DeGeneres joined in the song, singing “I Will Always Love You” at the top of her lungs. She also tried to randomly work in lines from “On the Road Again,” all while scraping on the washboard tied around her neck.

This has to be the most hysterical way of promoting the CMAs that we’ve ever seen! Check out DeGeneres’ side-splitting collaboration with Paisley and Underwood below.

Be sure to tune in to the CMAs when they air tonight (November 2) on ABC!