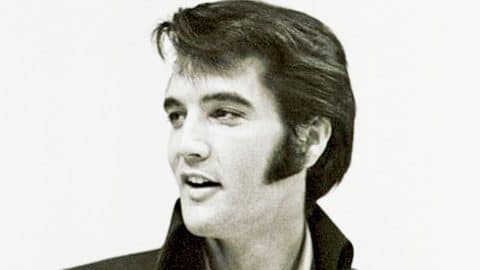 Love them or hate them, the Kardashians are one of the most famous families in the world. But what many people don’t know is that the Kardashians share not one, but two surprising connections with another famous figure…Elvis Presley.

Author Ian Halperin released a book in 2016 titled Kardashian Dynasty, in which he examines the family’s wild rise to worldwide fame. One of the many topics Halperin discusses in his book is the Kardashians’ connections to “The King of Rock and Roll.”

When Kardashian family patriarch Robert Kardashian met his future wife, Kris, you could say it was love at first sight, since Robert proposed after only three dates. But at the same time, Kris learned that she was accepted to start training as an airline stewardess, so they put their relationship on hold while she was away.

Kris fully believed that Robert would still be waiting for her when she got back, but while she was gone, he started a new relationship with Elvis’ ex-wife, Priscilla Presley.

A book claims Robert Kardashian was in love with Priscilla Presley before Elvis split them up. https://t.co/g6gKfNb0o7 pic.twitter.com/uv1Ec3kYGh

Even though Kris called Robert every night while she was gone, he remained more interested in Priscilla.

But Robert’s fascination with Priscilla was short-lived, and he eventually went on to marry Kris and have four children with her before they divorced in 1991.

As if Robert’s relationship with Priscilla before his marriage to Kris wasn’t surprising enough, Kris also serves as a link in the Kardashian family’s second connection to Elvis.

It just so happens that prior to her marriage, Linda had been in a four-year relationship with Elvis. To this day, Linda still reflects fondly on the time she spent with “The King,” and often talks about the love they shared.

TBT- since it’s Elvis‘s birthday week. This is one of my favorite photos with him. #thelookoflove 😉💜 #fierce #throwback #ontour

That means that both of Kris’ husbands at one time were involved with women who had previously been involved with Elvis. How wild is that?

Did you know all of this before? Learning about Elvis’ crazy connections to the Kardashian clan has us feeling “All Shook Up!”