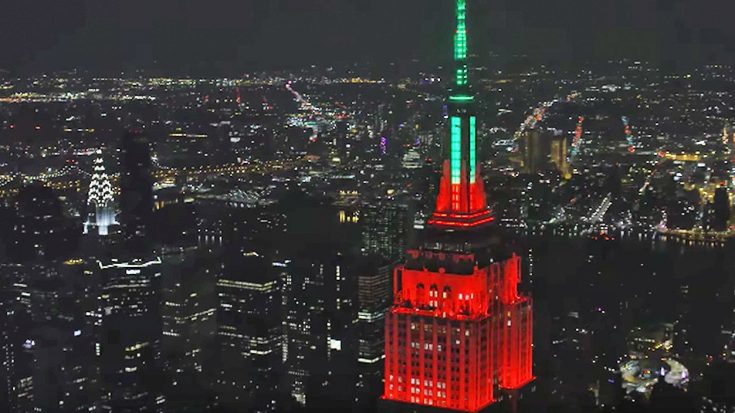 Between hosting her very own holiday special and releasing her first-ever Christmas album, it’s safe to say Gwen Stefani loves Christmas. In hopes of getting all of New York City in the holiday spirit, Stefani teamed up with iHeartMedia and the Empire State Building for their annual holiday light show.

Getting front row seating for the Empire State Building’s light show to the tune of her and boyfriend Blake Shelton‘s hit single, “You Make It Feel Like Christmas,” Stefani hopped into a helicopter to watch the whole thing go down from all angles.

“I can’t believe this is happening!” said Stefani outside the helicopter. “The New York Empire State Building while they sing my song for the holiday light show, this is the craziest stuff!”

In 2017, Shelton and Stefani reunited on the stage of The Voice to perform the Christmas tune they wrote together, the same set where they first fell in love years ago. Additionally, the pair teamed up once again to perform the festive love song on her Christmas special, You Make It Feel Like Christmas.

In addition to “You Make It Feel Like Christmas,” the 12-track album features a mix of both classic and modern Christmas songs, including “Jingle Bells,” “Let It Snow,” “My Gift Is You,” “Silent Night,” “When I Was a Little Girl,” “Last Christmas,” “Under the Christmas Lights,” “Santa Baby,” “White Christmas,” “Never Kissed Anyone with Blue Eyes,” and “Christmas Eve.”

You can check out the light show below!