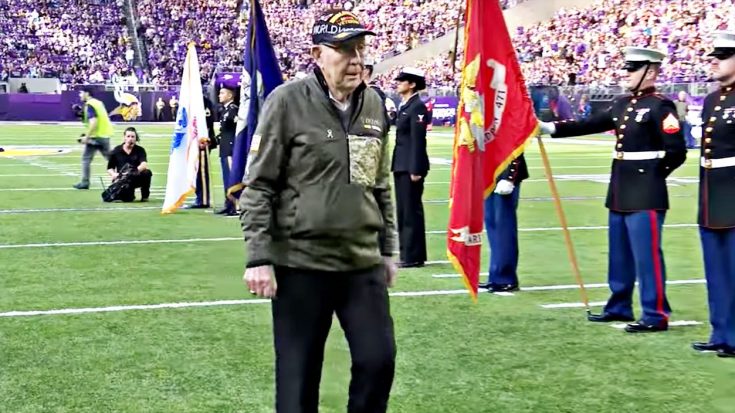 Thousands of people stood up in their seats to honor these men and women who have served our beloved country selflessly – celebrating patriotism and supporting all of our nation’s servicemembers.

Taking to the stage during the halftime show at a Minnesota Vikings game, traditional country music singer Jamey Johnson pulled out all the stops for this “Salute to Service” in recognition of the men and women who have served our country.

Marching down the center aisle, veterans from all branches of the United States’ Armed Forces were applauded and honored as imagery of many servicemembers’ time in service flashed across the Jumbotron, bringing sweeping emotion and patriotism to all who watched.

Johnson’s song, “In Color” was first released in 2008 as the first single from his sophomore album, That Lonesome Song, and took the charts by storm – soaring all the way into the Top 10 on Billboard’s Hot Country Songs. Not too long afterward, the song was nominated for two Grammy Awards that year and has since become one of Johnson’s signature songs.

Watch this heart-gripping performance in Jamey Johnson’s “Salute To Service” during the Minnesota Vikings’ game below.