By Jennifer Pernicano on September 27, 2016
Advertisement 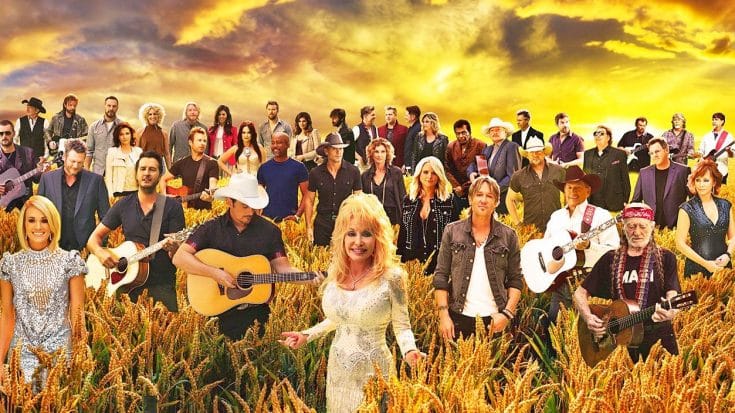 In September 2016, the music video for “country music’s most epic mashup” was released to fans who were anxiously waiting its arrival. The audio for the song, called “Forever Country,” was released beforehand and sent country fans into a frenzy.

Not only did the song make history for including so many of country music’s living legends and for being called the best country music project ever recorded, it also made chart history.

“Forever Country” debuted at No. 1 on Billboard’s Hot Country Songs chart, making it the third song in the chart’s 60 year history to do so. The only other songs that have debuted at No. 1 on this chart have been Garth Brooks’ 2007 hit “More Than A Memory” and  Craig Wayne Boyd’s 2015 debut single “My Baby’s Got A Smile On Her Face” immediately after he won The Voice.

According to Nielsen Music, the epic country mashup sold 93,000 downloads in its first week and according to Billboard, was streamed 5.7 million times. It also debuted at No. 1 on the Country Streaming Songs chart.

Billboard also reveals that each of the songs individually soared in sales, each selling upwards to 5,000 downloads.

Legends including but not limited to Alabama, Reba McEntire, Alan Jackson, George Strait, Willie Nelson, Vince Gill, Ronnie Milsap, and Dolly Parton all contributed to the project. Randy Travis even made an appearance, although he did not sing.

This is a well-deserved honor! Watch the “Forever Country” music video below.