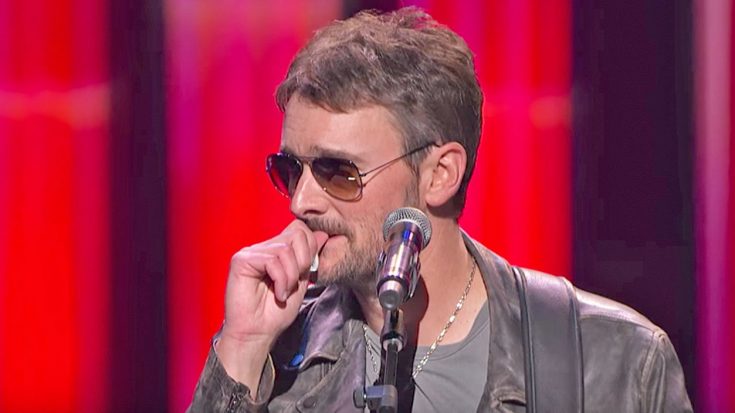 Eric Church became overwhelmed with emotion honoring the victims of the devastating mass shooting at Route 91 Harvest country music festival in Las Vegas this past Sunday (Oct. 1) which took the lives of at least 58 people and left over 500 injured.

I knew there was a reason I love Eric Church.Please please go watch the live performance of him singing "Why Not Me" at the Grand Ole Opry ?

The “Record Year” singer took the stage of the Grand Ole Opry Wednesday night (Oct. 4), opening up about the shooting that took place only two days after he headlined the festival Friday night (Sept. 29).

“This past Friday, I played the Harvest music festival in Vegas … 48 hours later, those places that I stood, it was carnage,” Church told the crowd of the Grand Ole Opry. “Those were my people. Those were my fans.”

Church, 40, was overcome with emotion recalling the electricity exchanged between him and his fans that night, the singer pausing momentarily to collect himself before continuing on.

Since the Route 91 Anniversary weekend is pretty much here, I thought I’d throw it back to the first night of Route 91 last year. While October 1st was the worst night of my entire life, I refuse to let it ruin all of the fun and amazing memories I made that weekend. Concerts are not ruined for me, and neither is Vegas?? #tbt #route91survivor #warrior #countrystrong #vegasstrong #ericchurch

Church went on to explain he didn’t want to perform but felt compelled to after watching Heather interviewed by Anderson Cooper on CNN, later revealing he wrote a song for her.

The singer commented on the two empty seats in the audience as the sole reason for him performing that night, to honor “his guy.”

You can watch the powerful video below.