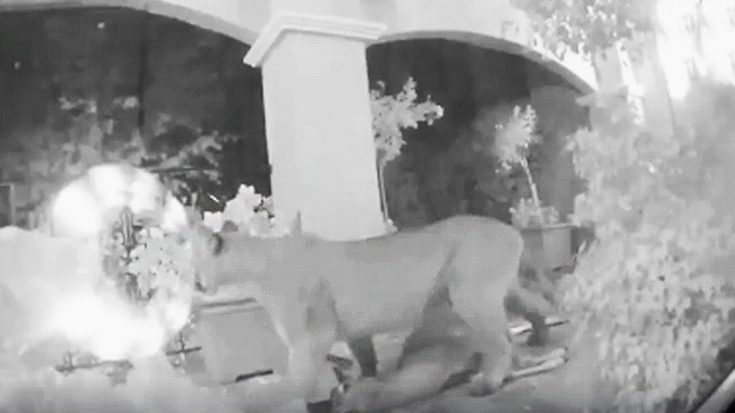 One family’s surveillance system proved as not only a safety instrument, but the perfect tool for capturing a killer shot, literally! Homeowners Mary Mines and Peter Rauenbuehler discovered chilling footage captured by their surveillance camera hidden on the back porch, to which they immediately uploaded to their community bulletin board to make others aware of the neighborhood’s newest visitor!

“I didn’t have my glasses on so when I looked through the peephole I thought it was a coyote,” Mines told ABC 7 News as she described the incident she had stumbled on. Upon telling Rauenbuehler that she believed a coyote had been wandering the porch, she fearlessly opened the door to see for herself. Not fearless for long, she immediately realized that this was a much bigger animal, quickly shutting the door to further investigate from the porch window.

Although unable to see the animal immediately, the couple was convinced their new pet was a mountain lion, as they continued to listen to what they believed was the animal slamming something against their metal fence. Upon turning on their porch light, their assumption was confirmed with the exception of one major surprise!

The mountain lion had dragged a freshly killed deer onto the porch, standing over its dead body before dragging his meal off the property and into the night. “And the dogs didn’t seem to intimidate the mountain lion at all. They were barking pretty crazy,” Rauenbuehler said.

The couple made sure to warn the children to be extremely careful, as their new visitor could return at any time. Talk about a wake up call!

You can watch the footage below!