‘Have You Thrown Me Drugs?’ Luke Bryan Reacts To Strange Fan Gift On Stage

By Manly Bryant on August 21, 2017
Advertisement 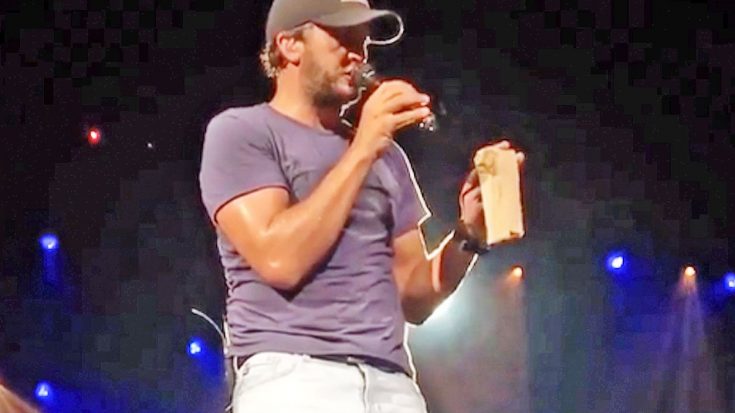 You never know what will happen when fans throw things at this country superstar! Since the launch of his 2017 Huntin’, Fishin’, and Lovin’ Every Day Tour, Luke Bryan has had countless bras and phones thrown his way, but none quite compare to what was thrown his way at one of his most recent shows.

Just as Bryan began singing “Play It Again,” the country singer spotted a mysterious brown package on stage, immediately making a few predictions of his own as to what it could be. After cautiously picking up the nondescript bag, Bryan inquired if the package’s content is legal.

“What the hell is this? Have you thrown me drugs on stage?” asked a confused Bryan.

After opening the small package, Bryan discovered the item was just a keychain a fan named Cheryl wanted to gift him with. The keychain had dolphins and Virginia Beach written on one side, with Luke written on the other. The country singer then laughed off the ordeal, declaring he’ll be keeping the present in a very special place.

“That’s a damn keeper right there, right next to my ass cheek,” said Bryan.

When asked about the hilarious incident and the fan’s reaction to Luke’s, Cheryl told Country Rebel, “I just laughed because that is Luke’s sense of humor…his good-natured ribbing.” She continued, saying, “He made the concert very special for me by accepting my gift.”

Luckily for Cheryl it was all caught on video by her good friend, so now she can relive the fun fan-involved moment for years to come!

After solving the mystery, the singer resumed his performance of his 2013 hit single. As for Cheryl? Expressing that Bryan’s music has saved her in a significant way, her next goal is to meet the country star and we hope that wish comes true for her!

You can watch it all go down in the videos below!

"Have you thrown me drugs onstage?" Well, that's a keeper…right next to my ass cheek." ????#lukebryan #teamluke

"That's a damn keeper right there, right next to my ass cheek.." ?? #lukebryan #teamluke ?