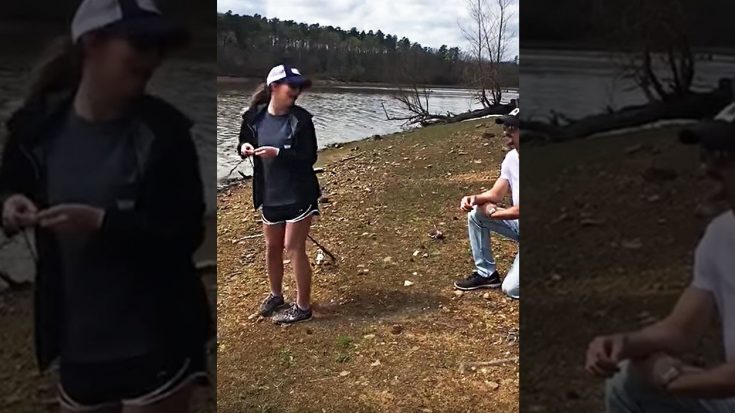 One couple’s day of fishing quickly became a moment of profound emotions when the boyfriend decided to snag his catch for life! Dylan, our mastermind behind the epic proposal, knew fishing was an intricate part of his girlfriend’s childhood, as she admitted in her video upload, “I’ve been fishing all my life. I grew up around a lake so my family would always take me fishing!”

As the southern belle reeled in her line, she noticed a note attached to the end of her pole. Casually pulling her rod towards her, she and examined the message. As she did, her boyfriend quietly dropped to one knee and was perfectly placed by the time his girlfriend had finally caught onto the occurrence.

In the clip, titled “You Had Me Hooked Since Day One”, Dylan’s girlfriend turned around to see her man kneeling down with a ring in his hand! She ran to her future husband and they embraced in a heartfelt hug, confirming that this girl said yes!

Props to this southern gentleman for incorporating one of the world’s best past times into the moment what will solidify his lifelong happiness with his wife-to-be. You can watch the heartwarming video below.