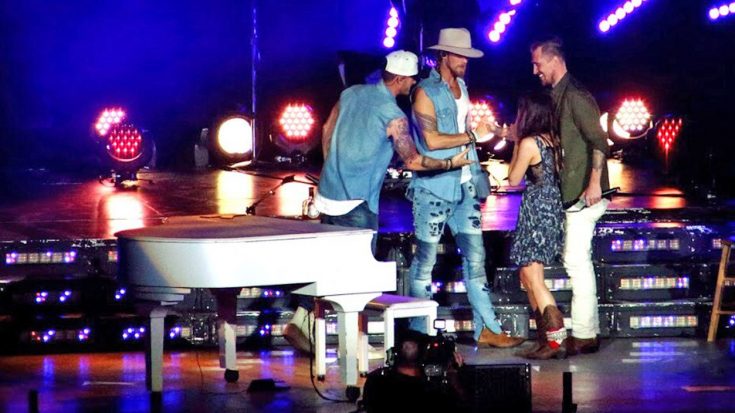 “I’m reaching out to you guys because I want to propose to this amazing woman. In order to make this proposal special, I need your help,” a man by the name of Danual Moon said in a video submitted to country music duo Florida Georgia Line. Miraculously, the video fell into the hands of Brian Kelley and Tyler Hubbard, who were more than happy to help out their love-stricken fan.

Taking place at their recent concert in San Diego, California at Mattress Firm Amphitheater, the boys of FGL stopped midway through their sweet country ballad “H.O.L.Y.” to lend over the spotlight to Moon, who had a very important question to ask his beautiful girlfriend, Kaylie Schwartz.

“Ever since I met you at that little country bar, I knew God was writing us a story. Every step of my life, every choice I’ve made, every joy, every heartache, everything,” Moon said to a stunned Schwartz. “And I wouldn’t change a thing about my past, because if I made one choice differently, I may have never met you.”

Moon then got down on one knee, pulled out a ring from his back pocket, and asked Schwartz to “make him the happiest man in the world” and say yes to their forever. And just like that, Moon and Schwartz became engaged in front of a packed stadium of 30,000 cheering fans. Kelley and Hubbard burst back on stage cheering them on before finishing out their performance of “H.O.L.Y.” as the newly engaged couple held each other tight still on stage.

“H.O.L.Y.” was released as the lead single off FGL’s third studio album, Dig Your Roots. The song – which is an acronym for “High on Loving You” – sat at No.1 on the country chart for a record-breaking 18 weeks.

You can watch the heart-melting proposal below.