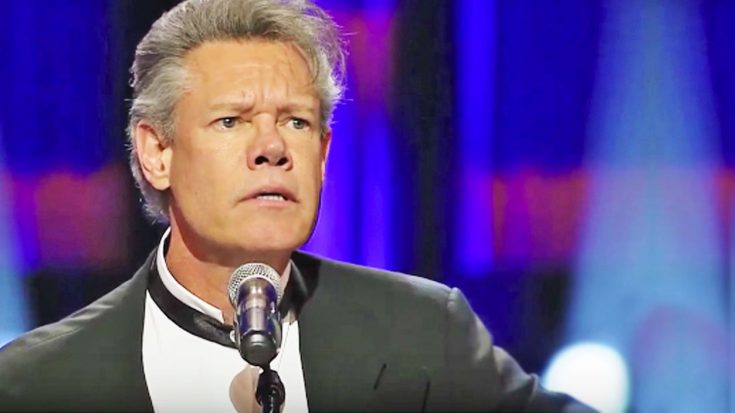 Honoring one of the finest vocalists in country music history, Randy Travis delivered a heartbreaking performance of “Amazing Grace” at George Jones’ funeral back in 2013.

The country singer took the stage of the Grand Ole Opry alone, delivering a stripped-down acoustic performance that allowed for the moving lyrics to shine through. While Travis maintained his composure during the performance, his emotion showed in his delivery of the powerful hymn.

This isn’t the only tribute Travis has performed in Jones’ honor. In 2013, he recorded another.

“I had a request through Warner Brothers to record the song as a tribute to George Jones, and after listening to it, I wanted to very much,” Travis said regarding his 2013 single in tribute to Jones, “Tonight I’m Playin’ Possum.”

Travis continued, “It’s just a wonderful piece of writing. And what I wanted to accomplish by doing it is simply what it is — a tribute to George. Many people in this business will say that he’s the greatest country singer that ever lived, and I agree. I thought a lot of him.

“Tonight I’m Playing Possum” is a traditional country song detailing the heartache surrounding the death of Jones many fans experienced. The lyrics tell the story of a fan hearing the tragic news, pouring a strong drink before spending the night shut in listening to old records of the “Possum’s” greatest hits.

Written by Keith Gattis and recorded by Randy in 2013, “Tonight I’m Playing Possum” pays a heartfelt tribute to The…

Even though Jones was somewhat absent from the country music charts during the time of his tragic death, country greats came together to honor the man who paved the way for so many artists. Travis Tritt, Alan Jackson, and Vince Gill, as well as Travis, were all amongst performers the night of his funeral.

You can watch the emotional performance below.