For The First Time Ever, Keith Urban And Carrie Underwood Perform Their Duet ‘The Fighter’ 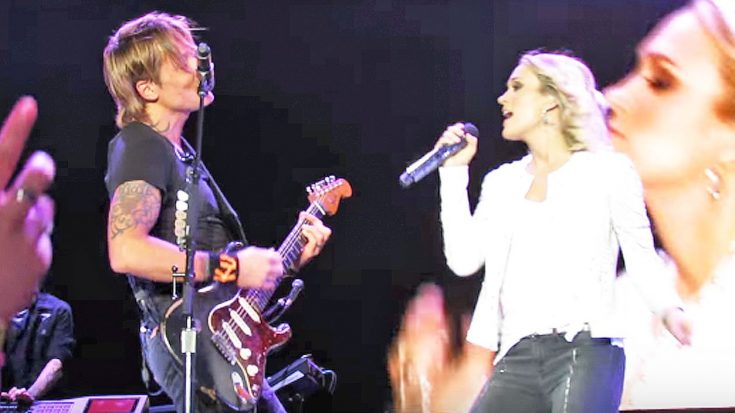 When Keith Urban released his album Ripcord in May 2016, it went straight to No. 1 on the Billboard Top Country Albums. So far, he’s released four singles that have done extremely well on the charts.

One song that wasn’t even released as a single but performed extremely well was “The Fighter”, which features Carrie Underwood, peaking at No. 11 on the Hot Country Songs Charts.

The song’s stellar performance on the charts comes as no surprise. For one, Underwood and Urban’s vocals together are insanely good. Another reason is Urban’s insanely viral video he made with his wife, Nicole Kidman. Their video has 52 million views on Facebook alone. You can watch that here.

Urban kicked off a tour supporting the album called the ripCORD World Tour and had Underwood join him for his tour dates down under. Because their schedules were both so crazy, they weren’t even able to record “The Fighter” together and have yet to perform it together until the New Zealand and Australia leg of the tour.

On Saturday (Dec. 3), Urban and Underwood performed their first of nine shows in New Zealand and Australia, which made it the very first time they performed “The Fighter” together and it was even better than we imagined!

Urban started out the song solo and during the chorus, Underwood appeared out of nowhere and everyone went crazy! While Urban played the guitar with intensity, Underwood danced along side him and we wish the song was longer! We can’t get enough of this song, and neither could the audience.

Now that they’ve finally performed the song together live, we are so spoiled and want them to sing this song all the time! Watch the awesome performance below.