For The First Time, Korie and Willie Robertson’s Son, Little Will, Opens Up About Being Adopted

By Manly Bryant on August 2, 2016
Advertisement 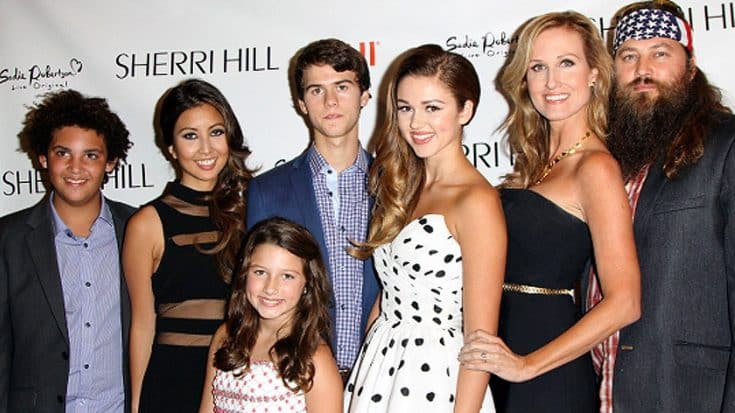 14 years ago, Duck Dynasty stars Korie and Willie Robertson adopted a son, whom they call ‘”Little Will“, when he was just five weeks old.

Being African American, Little Will is bi-racial and looks a bit different than his siblings and his parents, but they never let that affect his upbringing.

The younger Will stopped by his father’s Fox News Radio podcast to be interviewed by his parents and talk about his adoption.

Lil Will in the house for the #WillieRobertsonPodcast watch for his interview coming soon. #2ofmyfavoritemen ❤️

Willie kicked off the interview with a simple question. He asked his son, “What’s it like to be part of the Robertson family?”

“First of all, it’s awesome,” Little Will said. “I wouldn’t be where I’m at today for sure, because I don’t know where I would be right now. But other than that, it’s brought me a lot closer to Jesus and it’s brought up my maturity a lot.”

When asked if he ever felt different because he was not one of their biological children, he made it known that he always felt like he fit in with his family.

“I mean I knew I was different because I had a different skin color and my hair went up instead of down,” he said.

Initially, he didn’t even know he was bi-racial, but when he found out as a child, he said, “So that’s why I’m so tan!”

Little Will is not so little anymore. He is 14-years-old and going into 9th grade. He stands at five feet, eleven inches and weighs over 200 pounds. He is getting ready to play football and basketball for his high school.

He grew up in a house filled with anywhere between 3-5 siblings. That can be hectic!

“Most of the time it is really easy trying to get a long with [my siblings],” he revealed. “But it has changed a lot over the years. Me and Bella used to fight a lot. Since we’ve gotten older and we have matured a lot, we have become more like best friends.”

Duck Dynasty has been on the air for the last five years, and filming started when Little Will was only nine-years-old. Willie and Korie asked him what it’s been like growing up in a famous family.

“It has gotten a lot harder just walking around places because you just walk even in like a gas station or the movie theaters and people are like, ‘Oh my gosh, that’s Willie Robertson’s son!’ I remember we were at Sam’s Club and I walked past a check out lane and I saw a Chia Pet, but it was dad!”

At the end of the interview, Willie reveals that the greatest thing he’s ever done is adopt Will. They didn’t have all the money they do now, but he was in need of a family and they had all the love in the world to give him.

Little Will is featured much more this season of the hit reality show. He even learns how to drive!

You can listen to the interview here.