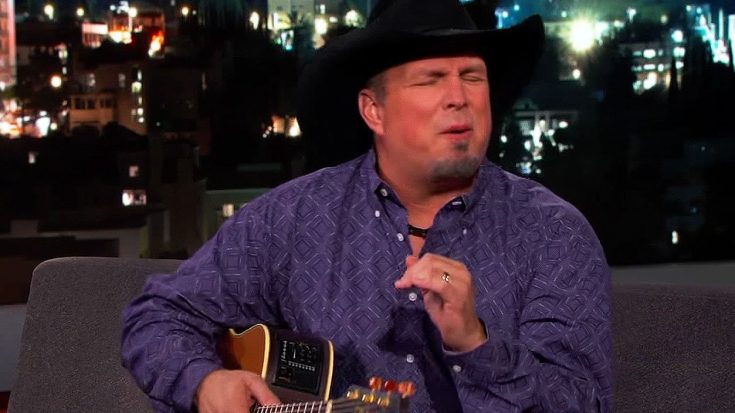 Garth Brooks has been ecstatic about his new Christmas album, titled Christmas Together, which features not only duets with his incredible wife Trisha Yearwood, but one song in particular featuring a legend that Brooks admitted he was gushing over. Singing alongside James Taylor, Brooks confessed to Jimmy Kimmel on The Jimmy Kimmel Show that, although he appeared smooth and nonchalant on the inside, his mind was doing backflips at the fact that he was singing alongside the iconic singer.

Kimmel asked, “Do you feel like you could say to him, like, ‘Oh, maybe try it like that,'” referencing the two collaborating in the music studio, to which Brooks replied with a firm “Oh, hell no!” He continued, “Poor guy, we made him do it a hundred time just so we could listen every time and go ‘that’s James Taylor!'”

As Brooks did, in fact, name one of his daughter’s after Taylor, he continued to express his awe for the singer, describing his as incredibly sweet and “painfully shy”, as Brooks adds that he believes that his characteristics make him even more lovable.

Of course, Kimmel took this starstruck memory as an opportunity to ask Brooks to do his best Taylor impression, even providing the singer with a guitar! Never one to back away from a challenge, Brooks gave it his best, subtly channeling the best Taylor impression he could amidst telling a story of a specific line the singer sang on the Christmas album that Brooks and his wife deemed the song fragment that must be on the track!

Upon giving a quite similar performance to one Taylor would have, Kimmel gives Brooks a piece of advice that sends him soaring! “Have you ever thought of getting together with James Taylor after this is out and record “You’ve Got A Friend In Low Places?” ultimately mashing up one of Brooks’ and Taylor’s most iconic hits. Brooks’ mouth dropped and he exclaimed, “I love that, actually!”

Check out the impression below and let us know what you would think about a Brooks-Taylor mashup!