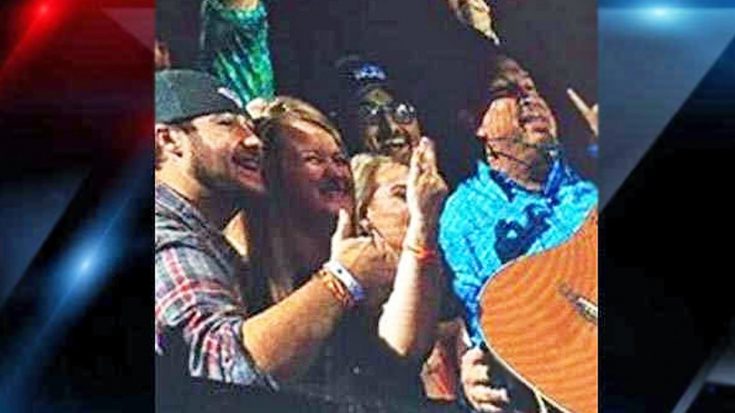 When JT Thompson proposed to his girlfriend Shelby Armitrage at a Garth Brooks concert, he knew the night would be a dream come true. But as he got down on one knee to pop the question, he had no idea just how much of a dream it would be.

Thompson and Armitrage were packed in with the rest of the crowd at Brooks’ concert in Greenville, North Carolina on Sunday (November 21). In the middle of all of the excitement, Thompson got down on one knee and asked Armitrage to marry him.

His proposal caught the attention of one of Brooks’ staff members, who quickly moved into action. After Armitrage said “yes,” the staff member ushered the couple to the front row to enjoy the rest of the show.

Brooks caught wind of what had happened, and acknowledged the newly-engaged couple to the audience. Thompson and Armitrage watched with awe as Brooks then performed a song in their honor, a cover of Bob Dylan‘s “Make You Feel Me Love.”

Dylan penned “Make You Feel My Love” and released it in 1997. Other artists have covered the song over the years, including Brooks and his wife Trisha Yearwood, who each sang a version for the soundtrack to the 1998 film Hope Floats.

But a special song wasn’t all that Brooks had in store for the happy couple. After he got done singing, Brooks took off his guitar, signed it, and handed it to Thompson and Armitrage. Now that’s one awesome engagement gift! You can watch the video of Brooks performing for the newly-engaged couple below. We’re sure that will be a night they will never forget. Congratulations!