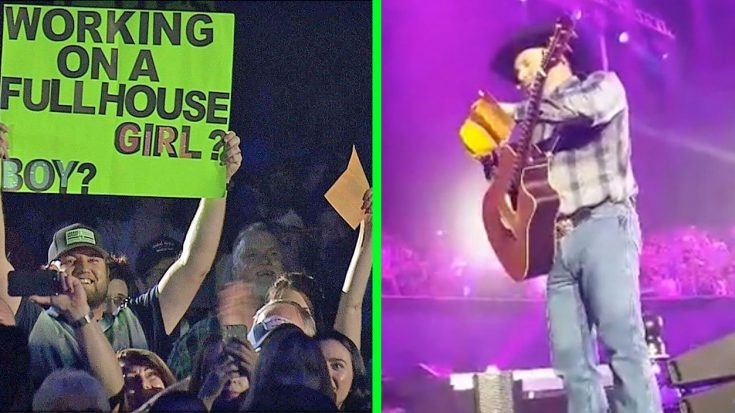 When it comes to gender reveals, most couples opt for a small gathering with family and friends. But Wesley and Katy Hansen decided to make their gender reveal part of a country superstar’s concert.

When Wesley and Katy were expecting their first child, they wanted to make their gender reveal something they’d never forget. They learned their baby’s gender the day before attending a Garth Brooks concert in July 2017 and decided to try and get the country star involved in the reveal.

The couple came to the concert equipped with a sign that read “Working on a full house. Girl? Boy?” This message referenced Garth’s number one hit from 1991, “Two of a Kind, Workin’ on a Full House.”

As luck would have it, Garth spotted the couple’s sign, and brought his concert to a halt to help with the gender reveal. They handed him the results, and rather than simply saying if it was a boy or a girl, Garth gave a personal touch to his reveal of the news.

“I got to tell you, I’m extremely happy for you, because I have three of these,” Garth said, referring to his three daughters. Wesley and Katy were having a girl!

The house lights turned pink as the couple celebrated the happy news. They revealed that before they even knew their baby’s gender they knew they wanted to name him or her “Brooks.”

We bet Garth was honored to hear this, and that he also felt honored to take part in Wesley and Katy’s gender reveal. But he didn’t stop there. After the couple had a little time to celebrate, Garth presented them with an incredible offer.

“We’ll make a deal,” Garth said. “If I’m still alive when Brooks goes to college, we’ll pay for her college.“

The couple was absolutely overjoyed, and Katy rushed over to give Garth a hug. She’s going to have quite the story to tell little Brooks when she gets older!

Tune in below to watch Garth help Wesley and Katy with their gender reveal. We love how much he cares about his fans!

While Garth was a guest on The Kelly Clarkson Show, Kelly had Katy, Wesley, and Brooks attend the taping and sit in the audience. During an audience Q&A session, the family stood up and reintroduced themselves to Garth.

He remembered them right away, and was so happy to see Brooks, calling her “beautiful.” You can watch that touching moment below.