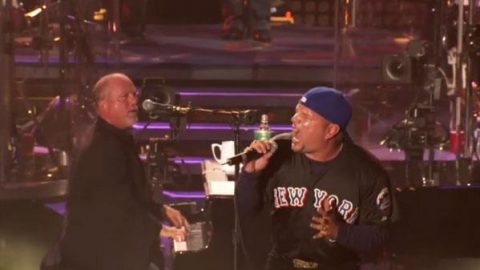 It was a 2008 commemoration performance to recognize the closing of the New York Mets stadium, Shea Stadium, that gave audience members a taste of two vastly different artists with one important similarity: their musical talent. Legend Billy Joel welcomed country music superstar Garth Brooks onstage for an breathtaking performance of the rocker’s original, “Shameless”. Brooks was all too familiar with the tune, seeing that he had previously recorded the song and stuck it in a former album of his, titled Ropin’ The Wild.

Brooks rocked the lead vocals as Joel accompanied him with his stellar backup vocals and mesmerizing piano skills. The collaboration between the two not only stuck true to Brooks’ original tempo, but also incorporated rock elements that sent the song to new musical heights!

As the song continued, Brooks approached Joel’s piano and basked into the pianists vocals as he proudly sang the heart-wrenching hit song! Both of the joined in song to profoundly showcase their vocal abilities that coincided perfect with the other! Needless to say, fans were awestruck at the star power!

Check out the performance below and tell us how you felt about the duet!