By Miranda Raye on March 21, 2018
Advertisement 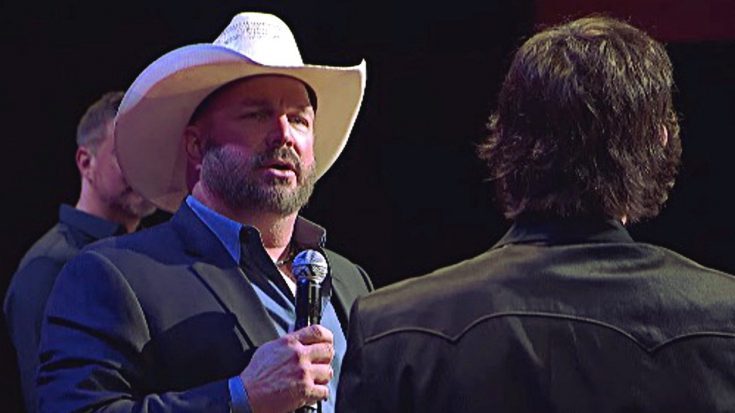 Just one year after the release of his debut studio album, Garth Brooks was granted one of the highest honors in the country music world…he was invited to join the Grand Ole Opry.

Brooks was inducted into the Opry in 1990, signaling just how much faith the Opry had in him as an entertainer. Since then, Brooks has racked up endless Entertainer of the Year award wins and has shattered ticket sales records all over the country.

Because of his busy schedule, it’s a rare thing for Brooks to be able to make an appearance at the Opry. Finally, Brooks stopped by the Opry on Tuesday night (March 20) for one extremely important reason.

You see, that night was dedicated to the induction of another artist…Chris Janson. Every time a new artist is inducted into the Opry, a current member does the honor of inducting them.

Much to the surprise of Janson and the crowd, Brooks was the one who came from behind the stage to welcome Janson into the Opry. The crowd roared at the sight of the six-time CMA Entertainer of the Year winner, who took off his hat and raised it to them and Janson.

Clearly stunned to see Brooks there, Janson reached out to him for a hug. After the crowd’s cheers died down, Brooks moved in to a short speech.

“Congratulations, first of all,” he said. “I came out here with a big speech…There’s nothing that I can tell you that you don’t already know.”

A teary-eyed Brooks then spoke to an equally emotional Janson about just how important the Opry is:

Before he took off, Brooks wanted Janson to know how his Opry induction night will always stick out in his mind.

“This will be, no matter how many times you look back on it, the greatest night in your music career,” he said. “It was in mine…”

Brooks and Janson shared a tearful hug before Brooks departed, leaving Janson to soak in the glory of the moment. Since they were both crying, we have no doubt that many members of the audience were in tears as well.

You can watch the emotional moment that Brooks surprised Janson at the Opry in the clip below. Congratulations to Janson on being inducted into the Opry!