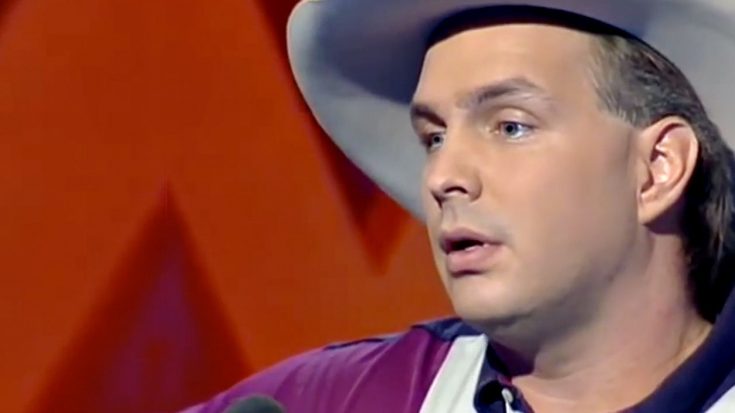 Just a short time after her birth, the country legend becomes emotional during a heart-wrenching performance of one of his biggest hits.

At the beginning of his monstrous rise to fame, the master showman Garth Brooks exposes his softer side during a press stop in Scotland while on tour in Europe.

“I got to dedicate this to my little girl, Taylor,” He says softly as he picks up his guitar. “And now, for the past seven or eight shows I’ve [gotten] to dedicate it to not only her, but my brand new little girl, August as well.”

With not another moment’s notice, Brooks dives right into his enchanting and heartfelt ballad, “If Tomorrow Never Comes” and channels the deepest of emotions and pure love for his daughters into this unforgettable performance.

As he moves patiently and strongly through each verse, you can hear him getting emotional just thinking about his beautiful daughters and the joy they bring to his world. But, can you really blame the guy?

The sweet performance was taped just a decade before he would announce his retirement so that he could focus on his new family. Now, years later, his daughters are slowly coming out of the woodworks – and making a name for themselves. His youngest daughter – who wasn’t even born when he recorded this beautiful video – seems to be following in dad’s footsteps!

Watch this heart-wrenching and beautiful performance in the video below.