By Jennifer Pernicano on July 31, 2017
Advertisement 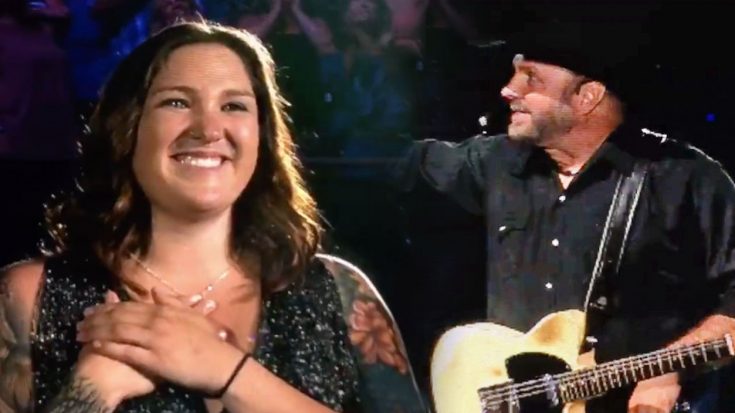 Like many artists do, Garth Brooks was introducing his band to the crowd at The Forum during his Los Angeles show over the weekend.

“We’ve been singing together since 1996, believe it or not,” he told the audience, introducing his newest backup singer. “This girl can also play a mean acoustic guitar. She’s a great songwriter and great singer. She is from Owasso, Oklahoma. Give it up for Miss Allie Colleen!“

Allie just so happens to be Brooks’ youngest daughter and the crowd definitely picked up on that. It was a very special night for Allie because she turned 21 that day!

Brooks told the fans this news, and led them in singing a sweet “Happy Birthday” serenade to his baby girl. As her image was up on the big screen, she placed her hands on her heart, motioning how moved she was by her dad’s gesture.

Her birthday surprises didn’t end there, though! Waiting backstage was her boyfriend, Jonathan Roberts with something she never saw coming – a proposal. As her dad was singing “She’s Every Woman”, Roberts got down on one knee, and Allie said yes!

This was definitely a birthday she’ll remember forever! Watch the sweet birthday serenade below.