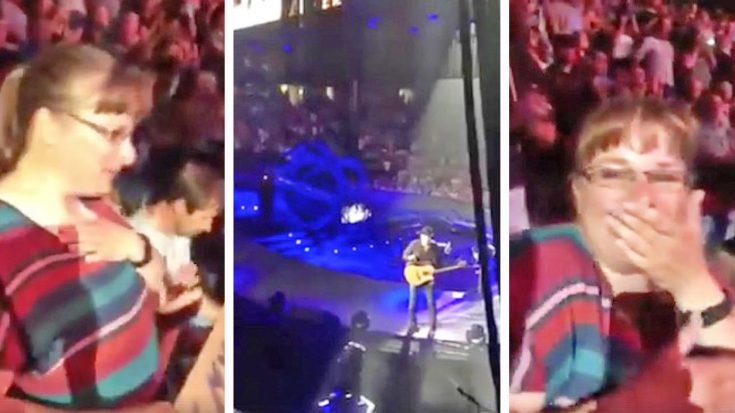 Just three hours before she took off to attend a Garth Brooks concert, Gale Granrude-Gariepy got the news she has been waiting to hear for over a year. Her six-year-old son, Mason, is now cancer free.

Gale couldn’t contain her excitement after learning the good news, and wrote a special sign to take to Garth’s concert that night. The sign read “Today my son is cancer-free.“

Since Gale was seated close to the stage, it didn’t take long for Garth to spot her sign. He stopped in his tracks the second he did, and began to engage in conversation with Gale about Mason.

As a parent himself, Garth sympathized with the struggles that Gale has been through since Mason was diagnosed. “As hard as that child has fought, I know you have fought a hundred times harder,” he said.

Gale shared that Mason was unable to attend that night because of his weakened immune system, and that it would take two years for it to regain strength. After hearing that, Garth knew he had to send something home with Gale as a gift to give to Mason.

That’s when Garth took the guitar off of his back and asked Gale how to spell Mason’s name. Gale covered her face with her hands and was visibly emotional as Garth autographed the guitar.

“Give Mason a hug for me,” Garth said once he finished his signature.

Gale later took to Facebook to share a photo of a smiling Mason and the signed guitar that Brooks gifted to him. “He is very protective of it and can’t wait to show his brothers and dad,” Gale wrote.

Someone happened to capture the emotional exchange between Gale and Garth on film. The video was shared by the Ronald McDonald House Charities Southern Alberta Facebook page, and has since been viewed nearly 300,000 times. You can watch the touching video below.

Congratulations to Mason on being cancer-free!

Warning: This video will make you cry happy tears.

Yesterday, Mason's mom received the news she'd been waiting for: Mason is officially cancer free!! She didn't think the day could get any better, but then this happened at the Garth Brooks concert at Scotiabank Saddledome!

A huge thank you to Karyn who surprised Gale with tickets after reading her family's story on Facebook last weekend (http://bit.ly/2vU9P6I).