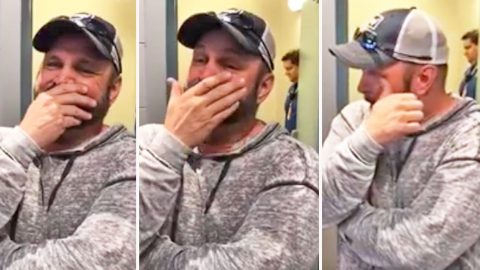 Every week, country superstar Garth Brooks does a Facebook Live session with his fans normally titled Inside Studio G. This week was extra special, because his brand new single “Ask Me How I Know” was released the same day, Monday (March 27).

Instead of doing his regular Inside Studio G, where he talks his tour, takes fan questions, and usually speaks about something that is going on in the world, he took us on a wild ride through Bridgestone Arena in Nashville, Tennessee.

His goal was to surprise Mitch Rossell, the man responsible for writing his single “Ask Me How I Know” while he was doing a radio interview on the Sirius XM radio show The Highway.

While he was giving fans a behind the scenes tour of the arena, which was set up for a Nashville Predators hockey game, Brooks’ camera operator told him that Rossell penned a note to him and decided to read it right there on camera.

Seeing as this is Rossell’s very first song to hit the radio, it was quite an emotional day for him.

As the camera operator read each line, Brooks became more and more emotional, even wiping away tears. You can tell that as much as Brooks recording this song means to Rossell, Rossell himself means a lot to Brooks.

After the tears were gone, Brooks surprised the heck out of Rossell live on the air and they couldn’t stop praising each other! Watch the incredible moment below, followed by the interview.

Today is a GOOD day!