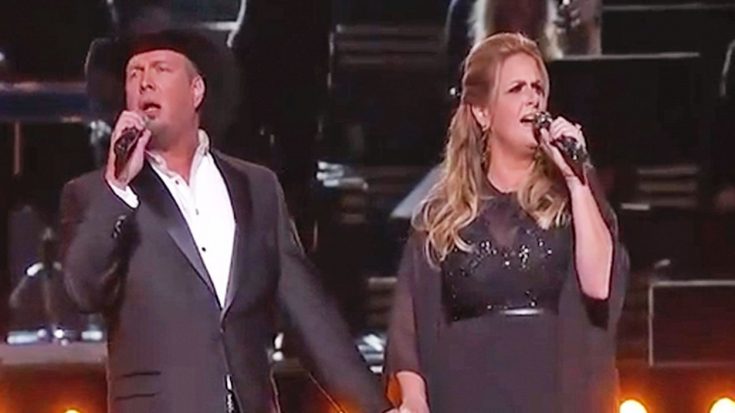 It doesn’t get any more nostalgic than that, folks! Garth Brooks and his lovely wife Trisha Yearwood have just captured the epitome of country music with their electrifying duet incorporating some of the biggest pairs country music has ever known!

The country music power couple kicked off their highly anticipated performance by channeling one of the greatest duets of all time, Johnny Cash and June Carter’s “Jackson”! As the crowd soared with joy and pride in their classic roots, the number transitioned into a sensational tribute to Crystal Gayle with her heartbreaking hit “Don’t Make My Brown Eyes Blue”. While the couple elicited major emotions from their mesmerized crowd, they quickly broke into yet another iconic duet of Conway Twitty and Loretta Lynn’s vibrant hit “Louisiana Woman, Mississippi Man”, bearing a striking vocal resemblance to the original 1973 classic!

However, the singers were also able to showcase their individual vocal talent when Yearwood overtook the stage with her lively performance of Lynn Anderson’s sock it to ’em song “Rose Garden”. However, Brooks was no stranger to the solos as he wowed the audience with his performance subsequent to his wife’s, a tribute to Keith Whitely’s heartbreaking ballad “Don’t Close Your Eyes”.

Of course, as we all know, no performance can be complete without a heck of a classic and, in this incredibly wise decision, the two chose to wrap up their iconic duet with the classic duet “Golden Ring”, made famous by Tammy Wynette and George Jones. The couple carried their impeccable harmonies and gave an striking rendition to the original hit, closing out the performance with a gazing look of love into the other’s eyes! Talk about a closer!

The two received the most admirable of ovations for their blast from the past that undeniably paid proper respect to the greats of country music that diligently paved the road to the 50th CMA Award celebration.

Didn’t catch the performance? Check it out below and tell us what you thought of the song selections!

#CMAawards50 is on RIGHT NOW on ABC!