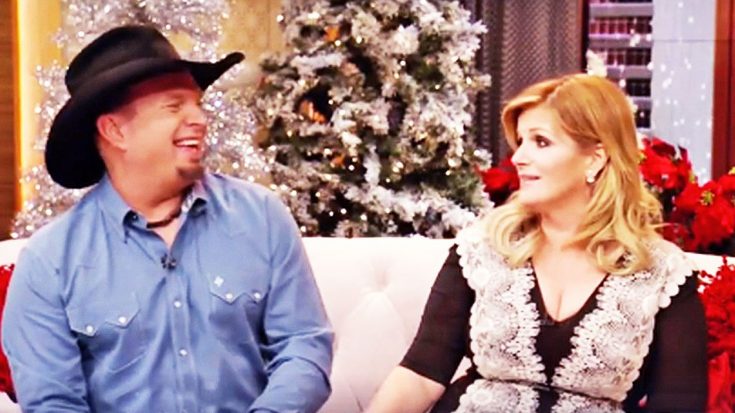 Garth Brooks and Trisha Yearwood have never been a couple to publicly conceal their love for each other, as Brooks often admits that while he refers to his lovely wife as “The Queen,” she refers to him as her “Current Husband” along with “Mr. Yearwood.”

Standing next to the QUEEN makes any day a great day, but especially today! love, g #CMAawards50

Despite the comical jokes, these two have been head over boots for one another since their relationship blossomed. The two sat down with Kelly Ripa and Christian Slater on Ripa’s show, Live With Kelly, for an interview that quickly turned to mushy-gushy details on their relationship.

Every day is Valentine's Day with you, Mr. Brooks. All my love! xoxo Mrs. Brooks

While just before this interview, the two recently celebrated their 11th wedding anniversary, Brooks admitted that he committed a marriage foul when he booked a gig on the big date without asking his wife! However, he made a major save when he revealed the event was in Hawaii! “Good call, honey,” Yearwood laughed.

“We made the conscious choice when we got married to not be apart,” she explained as she described why the two tour together. Of course, questions on their proposal arose and Brooks began to reveal one of the most heartwarming proposal stories we’ve ever heard.

He explained a past honor, saying, “They unveiled like 7 statues out in Bakersfield when Buck Owens was still alive at Buck Owens’ place… and it was Hank Sr. and Haggard, all the greats. And for some reason they included me on it.” Brooks went on to remember his conversation with the man that created the statues, asking him just how long the statues would last. “They’ll last about 2,000 years,” he admitted.

At this point, Brooks told the guy, “Well, then there is a woman’s ring that I would like to wear. I’m gonna propose to her.”

Of course, he was referencing his now-wife, Trisha!

The man added a wedding ring to the left ring finger of Brooks’ statue, and the singer admits that upon the reveal of the statue, “the first thing [Trisha] did was look at the ring.”

“I’m like, ‘Why is there a ring on your finger?‘” Yearwood said of her stunned reaction. “That’s when he went down on one knee.”

The rest was history! The two have been inseparable ever since and have maintained a happy marriage and endless love for the other.

Watch their interview below and tell us what you thought about Brooks’ surprise proposal!