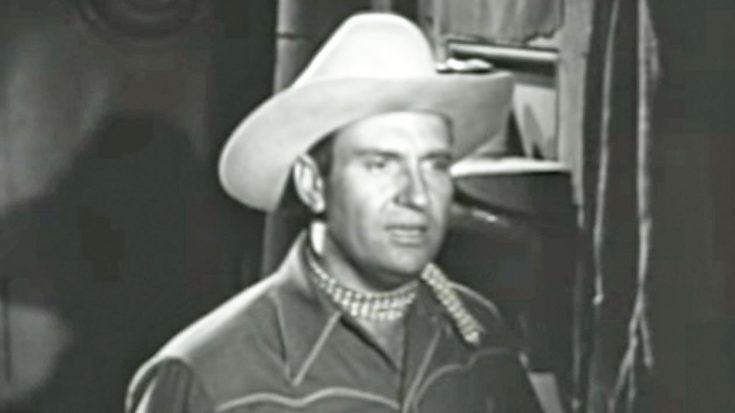 There’s many reasons why Gene Autry was nicknamed “The Singing Cowboy.” He was a huge fixture in the movie business, but an even bigger one in the country music world.

His films helped bring country music to the forefront, and to a national audience, making him one of the most important figured in the history of country music. Many fans have their favorites of his songs, but it’s without a doubt that “Back in the Saddle Again” is his most beloved.

One of our favorite songs of his is “Ghost Riders in the Sky,” which was written by Stan Jones. It was most popularly performed by Vaughn Monroe, but Autry’s version really sticks out to us. Probably because his 1949 film Riders in the Sky was based on the song.

In the film, he sings it when an elderly man on his death bed says, “It’s almost like I can hear ’em singing now.” Autry then gets up from his chair next to the man and stands by the window, telling the story of the “Ghost Riders In The Sky,” almost assuring the man he will still be a rancher after he passes away.

The movie perfectly tells the story behind the song, which is also another reason why we love this version. Autry didn’t only sing “Ghost Riders In The Sky” in Riders in the Sky, but he also performed in the 1953 film Goldtown Ghost Riders.

Watch him perform it in Riders in the Sky below.