By Miranda Raye on August 8, 2016
Advertisement 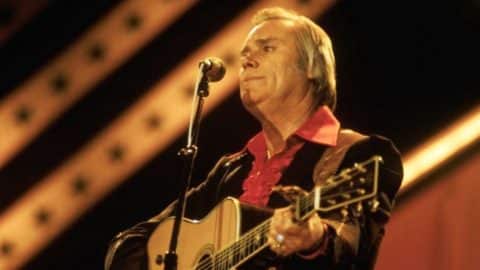 One Of “The Possum’s” Most Meaningful Songs

George Jones didn’t write the song “If I Could Hear My Mother Pray Again,” but when you hear him sing it you’ll swear he did. Jones’ love for his own mother is what makes the words of this gospel classic ring true to his life.

“If I Could Hear My Mother Pray Again” was written in the 1920s by John Whitfield “Whit” Vaughan and soon became a popular part of the gospel genre. Vaughn wrote the song as a tribute to his mother, Clara, and based the words on a text by an English settler named James Rowe.

Why George’s Version Matters So Much

Jones released his version of the song on his 2003 album, The Gospel Collection. The album was the result of Jones’ lifelong love of gospel music, instilled in him by none other than his own mother, who like Vaughn’s mother, was named Clara.

During an interview with The 11th Hour Magazine, Jones shared that his earliest musical experience was singing in church with his mother. Jones’ mother was a devout Christian, and played piano in their local church, which is where Jones learned learned to play guitar.

Knowing Jones’ backstory and his relationship with his mother makes his emotional version of “If I Could Hear My Mother Pray Again” all the more meaningful. You can listen to Jones’ beautiful rendition of the song below.

We’re sure Jones’ mother would have been proud of him for paying tribute to her in such a gorgeous and meaningful way. May they both rest in peace.