By Manly Bryant on October 9, 2014
Advertisement 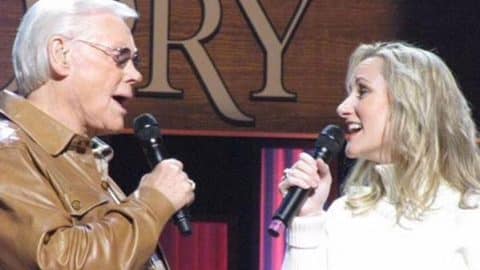 George Jones, due to his hectic performing schedules and life on the road, was considered an absent father to his four children and later earned his nickname “No Show Jones” in light of his frequent concert mishaps despite his incredible talent. However, he openly spoke to PEOPLE about the lifestyle, crediting his now widowed wife Nancy Jones for getting him through the difficult parts in his life. He said,

“I was down about as low as you can get. I didn’t think there was any way back, so if I hadn’t lucked out and had Nancy, I would probably have wound up dead.”

It was later in his life when Jones would reconcile with his children and make amends for the lost years. His daughter Georgette Jones, Jone’s only child with country legend Tammy Wynette, used their reconciliation as an opportunity to record a beautiful father-daughter duet to express their newfound relationship.

The touching song blatantly addresses Jones’ career and lifestyle tearing him from his daughter, despite him remaining her hero throughout her life. The two continue in a charming chorus singing,

“I’m sorry that it took so long, /But better late than never. /The love we thought we’d lost /Was not that hard to find. /It only took the three of us, /You and me and time.”

The song brought listeners to tears at the wonderful relationship the two were ultimately able to produce regardless of any past complications and feelings of neglect.

While this song remains extremely emotional, we highly suggest giving the gem a listen and telling us how it made you feel!