George Jones’ Great-Grandson Dressed Like Him For Halloween In 2017 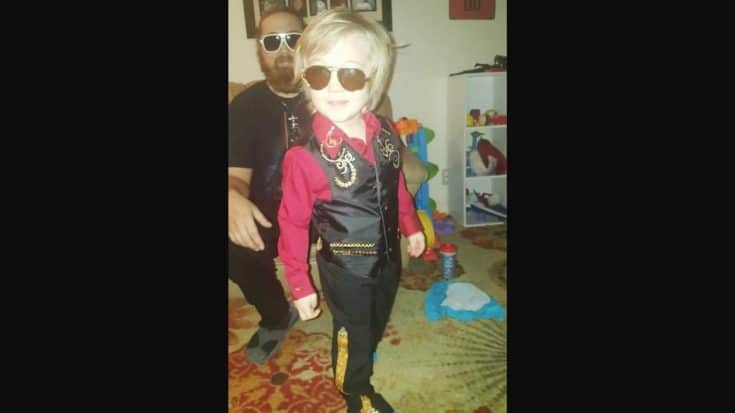 There are all sorts of Halloween costumes to choose from these days. Kids can dress up as superheroes, Disney characters, spooky creatures, and more.

Other kids opt to dress up as somebody famous, such as a singer or actor. But few kids actually have a famous family member that they can model their Halloween costume after!

Georgette Jones, the daughter of George Jones and Tammy Wynette, was absolutely amazed when she saw who her grandnephew dressed up as for Halloween in 2017. As she revealed through a Facebook post she, her grandnephew’s costume resembles George!

“Jenifer (my nephew, Darren’s wife) is amazing!” Georgette wrote. “She made this costume for their son to dress up as his great pawpaw!!!”

Of course, Georgette knew she had to take some pictures of her grandnephew’s costume. She shared a couple of those photos with her fans, and they are as priceless as can be.

The little fella’s costume consists of a black, Western-embroidered vest and a pair of pants to match. On the back of the vest, the name “Jones” is spelled out in dazzling gold letters. The whole look was completed with a pair of sunglasses.

Between the costume itself and the way his hair is styled, George’s great-grandson looks like his spitting image! Check out the photos Georgette shared of him and see for yourself!

Isn’t he as cute as can be? Have you or your kids ever dressed up as country singers for Halloween? If so, share some pictures of your costumes with us in the comments!