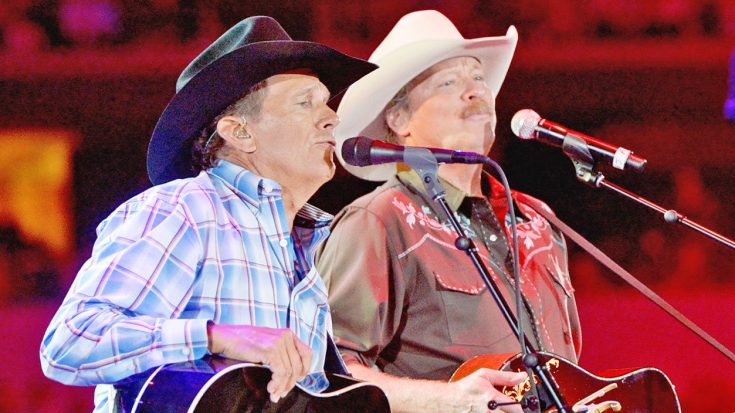 While George Strait has been performing select dates in Las Vegas, he officially retired from full-on touring in 2014. To say goodbye, he put on his legendary Cowboy Rides Away Tour, traveling city to city for one last time.

His tour finished in Arlington, Texas at AT&T Stadium, where he filmed and recorded his final concert. He invited several country singers to join him for duets, and there’s no way he was going to forget about quite possibly his most famous duet of all time.

In 1999, Strait and fellow traditional country singer Alan Jackson performed “Murder on Music Row” at the CMA Awards and recorded it the next year for Strait’s Latest Greatest Straitest Hits album. Even though their recorded version wasn’t ever released as a single, it reached No. 38 on the Hot Country Songs chart.

The song was extremely well-received by critics, winning Strait and Jackson the CMA award for Vocal Event of the Year and Song of the Year in 2000 and 2001, respectively.

Jackson stopped by Strait’s final Cowboy Rides Away Tour stop in Arlington to perform their iconic duet together and thrilled the fans in the stadium.

Watch them perform “Murder on Music Row” below.