By Jennifer Pernicano on November 18, 2016
Advertisement 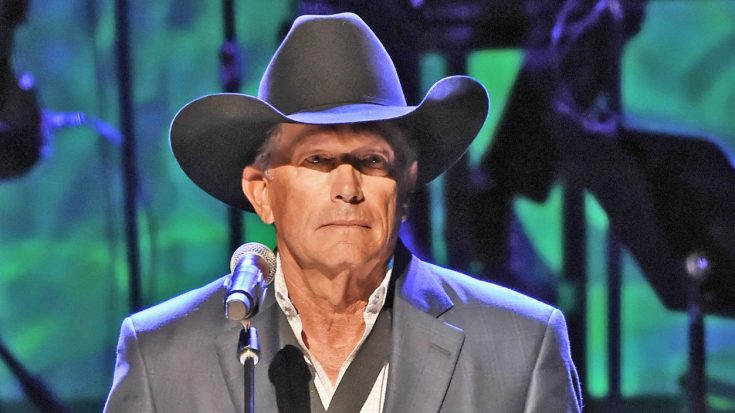 November 18, 2016 went down in history for George Strait fans. It is the day he released his Strait Out Of The Box Part 2 box set, which includes music from 1996-2016 plus two brand new songs. It also went down in history as the day George Strait called out country radio. In the past, he’s had lots and lots of success, but more recently, he hasn’t been getting a lot of love from country radio.

Apparently, he’s not alone. Country singer-songwriter Jamey Johnson is a huge talent, but radio stations won’t play his music. They got together and wrote about their frustrations with being kicked off country radio and titled the song “Kicked Outta Country.”

The song opens with the lyrics, “I just got the news today, the record I sent them they threw it away/It don’t fit the format, don’t make the list/They said I’m too old, won’t even be missed.”

Throughout the song, he sings about when country radio stopped playing Merle Haggard, Willie Nelson, Waylon Jennings, and Johnny Cash. He notes that they continued to write what they knew, sing what they wrote, and they didn’t care what anyone thought.

Strait isn’t normally this outspoken, in his music or in interviews, and with his 2015 album Cold Beer Conversation getting little to no love on country radio, it must have been the straw that broke the camel’s back.

His two singles from Cold Beer Conversation, his twenty-ninth album, peaked at 33 and 46 on the Country Airplay charts, which is a bit odd for a man who has sixty number one songs.

Speaking with CMT, Strait revealed how he and Johnson ended up teaming up to write “Kicked Outta Country.”

“He said, ‘I’m gonna pitch you some songs.’ I said, ‘Sure, I’d love to hear them, but they probably won’t play them on the radio anymore. He goes, ‘Yeah, you know they kicked me out of country too.’ I got to thinking about that the next day, and I texted him either I’m gonna write that, you’re gonna write that, or we’re both going to write it together. So we started texting each other ideas and ended up writing a song.”

Strait ends the song with the lyrics, “It don’t really matter, because I ain’t gonna change/Cause getting kicked outta country, won’t hurt a thing.”

He’s The King For A Reason

We’re glad he’s pledging that he will never change because he is perfect just the way he is. Watch his interview with CMT below.