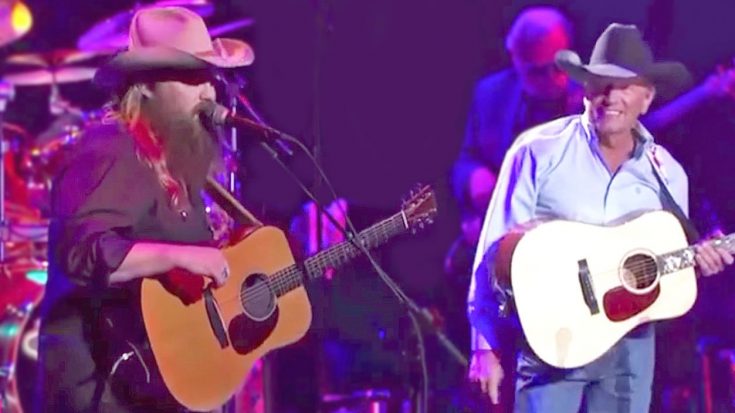 After his home state of Texas was left demolished and devastated following Hurricane Harvey in 2017, George Strait knew he had to step up and do something. He announced his plans to host a benefit concert in San Antonio, and enlisted some famous friends to help him, including Miranda Lambert and Chris Stapleton.

Tickets to Strait’s show sold out the same day they went on sale. Those who were unable to attend got the chance to get a little taste of the show during the Hand in Hand telethon that aired on September 12, 2017.

But some of the best moments didn’t end up airing during the telethon.

One of those moments was when Stapleton came out on stage to join Strait for one of his biggest hits. That hit was none other than “All My Ex’s Live in Texas,” which is one of the first songs people think of when they think of Strait.

“All My Ex’s Live in Texas” was released in 1987 off of Strait’s album Ocean Front Property. It was a smash success, and reached the top spot on the country charts in Canada and the U.S.

Due to its popularity, “All My Ex’s Live in Texas” is always a crowd-pleaser when Strait performs it at his shows. So you can bet that the crowd at his Harvey benefit concert was absolutely thrilled when they heard Stapleton would be singing it with him.

Stapleton’s duet with Strait didn’t mark the first time that the two collaborated. In fact, Stapleton has been working with Strait for years, and co-wrote his 2011 hit “Love’s Gonna Make it Alright.”

Knowing Stapleton and Strait’s history makes their “All My Ex’s Live in Texas” duet that much more enjoyable to watch. Strait graciously gave Stapleton the chance to sing lead on a substantial portion of the song, and the crowd couldn’t seem to get enough.

But the best part came whenever Stapleton and Strait joined in singing together. Their voices have distinctly different sounds, so together they create an interesting contrast. Plus, it’s just downright cool to hear two superstars such as them singing such an iconic song!

Tune in below to watch Stapleton and Strait duet on “All My Ex’s Live in Texas.” This is the stuff that dreams are made of!