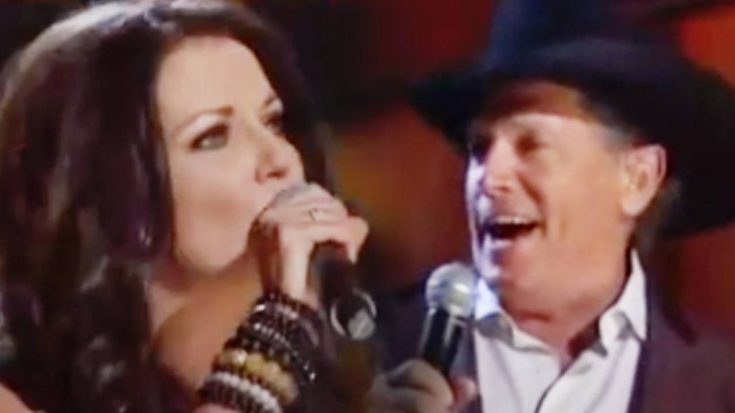 The performance was to honor Mandrell’s then-recent induction into the Country Music Hall of Fame.

Taking her cue from musician Charlie McCoy’s flawless harmonica intro, McBride graced the stage in a a deep purple gown as her angelic vocals pierced her audience. “I remember wearin’ straight leg Levis/ Flannel shirts even when they weren’t in style/ I remember singin’ with Roy Rogers/ at the movies when the West was really wild,” she passionately sang, painting a vivid picture of the genre’s humble beginnings.

A montage of photos and clips filled the screen behind McBride, showcasing old memories pertaining to the classic artists that both earned a reference in the tune and aided in the trailblazing of country music.

An eager Mandrell was seen in the audience, her eyes glistening with pride as her song assisted in recognizing the greats, including herself.

The tune was released in 1981 and featured a guest appearance from country music royalty George Jones.

Because the song featured a famous George, the CMAs invited another one – George Strait – to help McBride sing the song. About three-quarters of the way through the song, a male voice bellowed from backstage and out walked The King of Country Music himself!

The crowd – and Barbara Mandrell – look stunned by his appearance!

You can experience this phenomenal performance below.