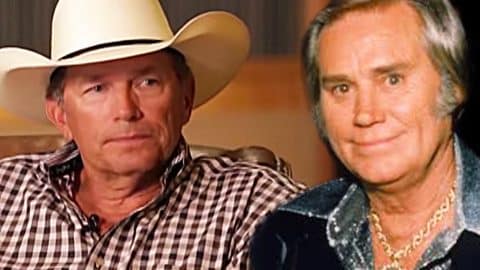 In a candid interview with Headline Country back in April of 2013, country music icon George Strait describes the massive influence that the late legend George Jones had on his success. Strait jokingly recalls the moment he met Jones and how starstruck he was by the cowboy, who Strait describes as “incredibly nice” and talks of the friendship that ensued between the two talents.

Strait goes on to reminisce of the times he spent performing with Jones near Jones’ private estate in Texas. He touched on a prominent memory he holds onto dearly in which the two singers, following a live performance, bonded at Jones’ home and even placed a small wager on a football game and ultimately won.

“I’m just so sad for them and we’ll send our prayers out to…the families,” said a grief-stricken Strait.

Jones passed away on April 26, 2013 at the age of 81. His funeral service was widely broadcasted and attended while variety of country stars, such as Brad Paisley, Alan Jackson, and Randy Travis, made tribute performances in honor of the country music trailblazer.

You can watch Strait’s interview on Jones below.