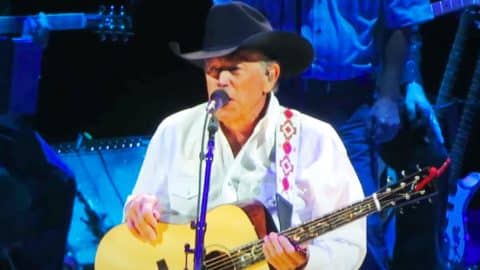 On April 25, 1988, George Strait released the emotional song “Baby Blue” as the second single off of his album If You Ain’t Lovin’, You Ain’t Livin’.

The narrator mourns the loss of his blue-eyed girl in the chorus, as he sings, “And baby blue was the color of her eyes. Baby blue like the Colorado skies.”

The emotional song was a major chart success, and claimed the top spot on the Billboard Hot Country Singles & Tracks chart following its release. It was written by songwriter Aaron Barker, who also wrote two other #1 hits for Strait: “Love Without End, Amen,” “Easy Come, Easy Go.”

Those who were unaware that Barker wrote the song often assumed it was autobiographical on Strait’s part. He and his wife, Norma, lost their daughter Jenifer when she was only 13 years old.

There’s no telling if Jenifer comes to his mind when Strait sings the mournful song. But he didn’t write it, so it wasn’t meant to be about her and her story.

In fact, when you pay closer attention to the lyrics, it’s clear the song is meant to be about a lover who left the narrator brokenhearted. As Strait sings, “Like a breath of spring, she came and left, and I still don’t know why, so here’s to you and whoever holds my baby blue tonight.”

Still, the song packs an emotional punch that gets to us every time we hear it. Watch Strait perform “Baby Blue” during a 2017 show in Las Vegas by tuning in to the video below.