By Manly Bryant on September 15, 2016
Advertisement 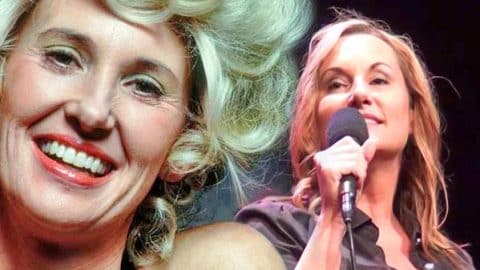 When your mother is one of the best-selling country music artists of all time, it’s only fitting for you to pay your respects to her legacy with a truly magical performance of one of her iconic hits.

Georgette Jones, daughter to country music legends Tammy Wynette and George Jones, did exactly that when she broke out into a wonderful cover of her mother’s hit “Stand By Your Man” at the Texas Troubadour Theater in Nashville.

Remembering my Dad and his wonderful smile❤
I miss him so much pic.twitter.com/QULBU1Xbyu

The song, which encourages women to stand up for their husbands, became one in five of Wynette’s No. 1 hits between 1968 and 1969. Ever since then, it’s remained a staple in country music and has played a big role in many people’s lives…

At one point in the song’s history (before it was known as a country standard) many folks took issue with it because they interpreted the meaning differently than what Wynette had. The songstress often assured naysayers that it is strictly a ballad about overlooking a fella’s flaws and shortcomings – but it’s nowhere near a “free pass.”

Georgette, who sported a classic look of denim and a simple black blouse, introduced the song, even giving women a little nudge to whisper the tune in their man’s ear every so often and see what fun goodies will come out of it.

With many laughs in the audience, it’s no wonder where Georgette inherited her infectious personality, as well as her vocal talent. Georgette carried a harmonious tune and showcased the classic sound that her mother so rightfully brought to country music.

Take a look for yourself!