By Jennifer Pernicano on December 27, 2017
Advertisement 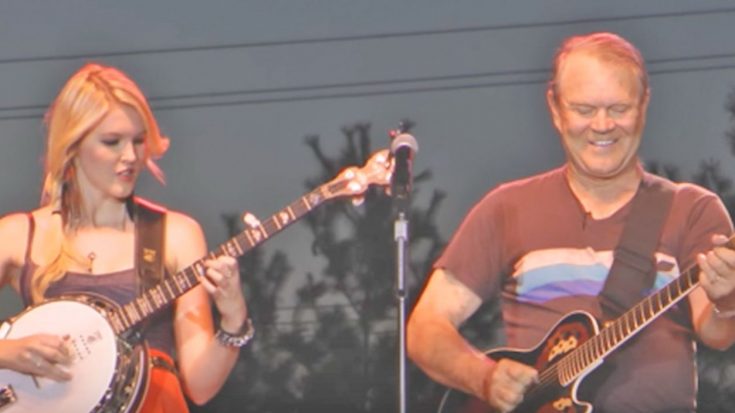 Some of Glen Campbell’s happiest moments were when a guitar was strapped around his neck. One of country music’s most legendary performers, Campbell broke down barriers and was the true crossover king.

In over 50 years in the music industry, Campbell released over 70 albums including 12 gold, four platinum, and one double platinum, sold 45 million records, and had 80 songs on Billboard‘s country, Hot 100, or Adult Contemporary charts. 29 of those songs hit the Top Ten, while nine reached No. 1 on at least one of those charts.

While he is known for his songs including “Gentle On My Mind,” “Wichita Lineman,” “Rhinestone Cowboy,” and “Galveston,” Campbell was also known for his incredible guitar playing skills. He seemed to have passed this down to his youngest daughter, Ashley, who traveled the country with him on his Goodbye Tour in 2012.

Campbell revealed he was diagnosed with Alzheimer’s Disease in 2011 and later embarked on the Goodbye Tour with a closing date of November 30, 2012. During one of their tour stops in Springfield, Missouri on July 27, 2012, the father-daughter duo took on one of the most iconic banjo/guitar songs in history, “Dueling Banjos.”

Although he did play a couple wrong notes here and there at the beginning, that didn’t stop him from smiling through the rest of it, which is played at a faster pace, therefore more difficult. A few times throughout the performance, he and Ashley exchanged smiles, and you can’t help but smile seeing these two together.

Enjoy their “Dueling Banjos” performance below.