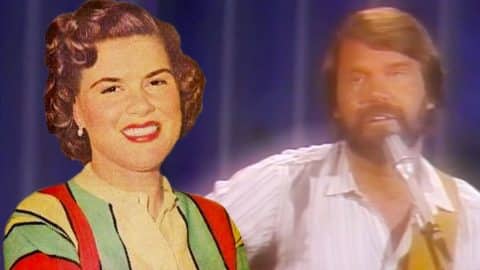 It’s one of the greatest country songs of all time. Written by Willie Nelson, “Crazy” became a major hit thanks to the voice of the one and only Patsy Cline. Today, “Crazy” is known as one of Cline’s signature songs, and many other artists choose to pay tribute to her by performing their own rendition.

Several artists have recorded and played “Crazy” before, and it would take ages to name them all. But one artist who deserves recognition for his spectacular version of Cline’s classic hit is Glen Campbell.

In 1982, which was 19 years after Cline’s death, Campbell sat down to play “Crazy” during a filmed performance. With his guitar in hand, Campbell strummed along while someone played a piano off screen, giving the song a slightly jazz-like feel.

Campbell delivered a remarkable performance and his voice hit each note with precision and clarity. He also knew just how much emotion the song required to portray its message of heartbreak and loneliness, which pushed his performance over the top.

If you thought that was enough to sell you on this performance, just wait until the end. That’s when Campbell makes an interesting choice with the final few words that will send chills up your spine.

Simply put, the “Rhinestone Cowboy” did a stunning job singing this beloved country classic. See and hear for yourself in the clip below.

What do you think of Campbell’s rendition of “Crazy”?