By Jennifer Pernicano on February 10, 2017
Advertisement 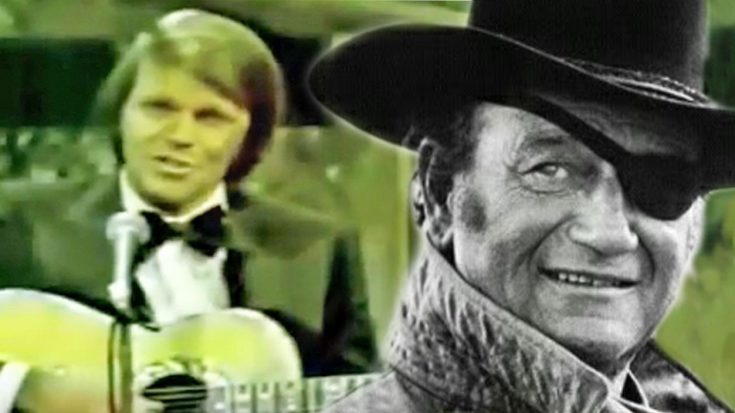 In 1969, Glen Campbell made his major motion picture debut alongside the legendary actor John Wayne for the film True Grit. The movie’s success surprised the cast, especially Wayne, who went on to win his only Academy Award for his portrayal of U.S. Marshall Rooster Cogburn.

Wayne had already reach legendary status by the time he filmed True Grit and just a few years later, was the honorary guest at an event celebrating his career in film, An All-Star Tribute To John Wayne, which was hosted by Ol’ Blue Eyes himself, Frank Sinatra.

You can’t celebrate Wayne’s career without the mention of one of his most iconic movies, True Grit. Since country legend Glen Campbell had a starring role and sang the title song, it’s no surprise that he was recruited to sing the song “True Grit” at the tribute.

“I’m here because when I was a very small boy, I used to pick cotton for a dime and go see the serials in the movies and you know what all the serials were? The Three Musketeers. John Wayne. But little did I know that I would do a picture with John Wayne and it would have such an effect on his life,” he said. “It was so great to be apart of the motion picture that brought this wonderful man his sole deserved Oscar. Hope this song brings back some memories, Duke!”

The song Campbell performed was written by Don Black and Elmer Bernstein, and included clips of Wayne in the movie, sporting the infamous eyepatch his character wore.

Duke looked moved by the performance and gave his friend Campbell a round of applause followed by a wave.

Watch her moving tribute performance below.