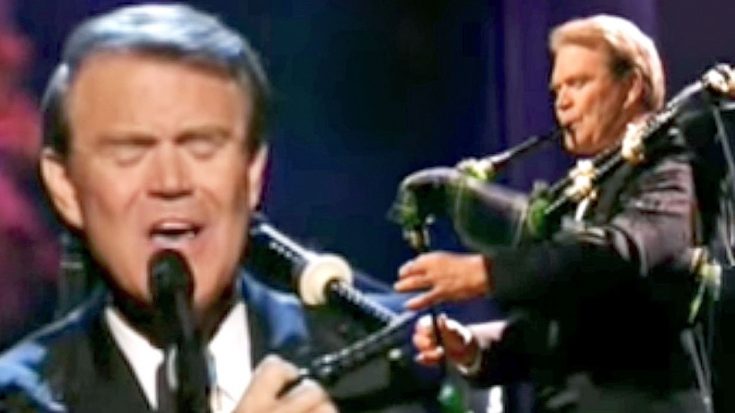 Anyone who knows anything about Glen Campbell knows that the “Rhinestone Cowboy” was universally acknowledged as an outstanding guitar player. But few knew that he could also play the bagpipes.

In January 2017, Campbell was named as the first-ever country artist to receive the prestigious Lifetime Achievement Award from the National Guitar Museum. The award is given to those known for “contributing to the legacy of the guitar and having a singular historical importance to the development and historical appreciation of the instrument.”

But Campbell’s instrumental skills go far beyond the guitar. He could also play the banjo, an instrument which his daughter, Ashley, has fallen in love with.

You wouldn’t expect this from a country music singer, but Campbell was also able to play the bagpipes. The centuries-old instrument is one that the average person hardly hears except for when they listen to the Christian hymn, “Amazing Grace.”

The History Behind The Hymn

Published in 1779, “Amazing Grace” was based on poet John Newton’s real-life experiences. He wrote the poem as a way of expressing how he felt after he found his faith and turned his life around.

Today, “Amazing Grace” is one of the most beloved hymns in history. Over the years, bagpipes began to be included in various performances of the song. In modern times, the bagpipe version of “Amazing Grace” is often played during the funeral services for fallen police officers, firefighters, and military members.

“Amazing Grace” is an emotional song to begin with, but there’s something about the inclusion of bagpipes that makes it more tear-jerking. Throughout his career, we’re sure Campbell managed to move plenty of people whenever he played his unique solo version of “Amazing Grace.”

While it’s typical for one person or a group to sing “Amazing Grace” while others play bagpipes, Campbell took on both roles.

During one performance he sang with the bagpipes propped up on his shoulder, and at times even sang with the mouthpiece between his lips. Now if that’s not impressive, we don’t know what is.

Campbell paused a few times to play short solos on the bagpipes. If you thought his singing was magnificent, just wait until you hear him play those bagpipes. You’ll likely have chills from the second he starts playing.

This video proves just how talented Campbell was. We guarantee you’ve never seen such a thing before.

There’s no doubt about it, Campbell was one of country music’s finest artists. If you need even more proof, just watch another one of his performances of “Amazing Grace” in the clip below.