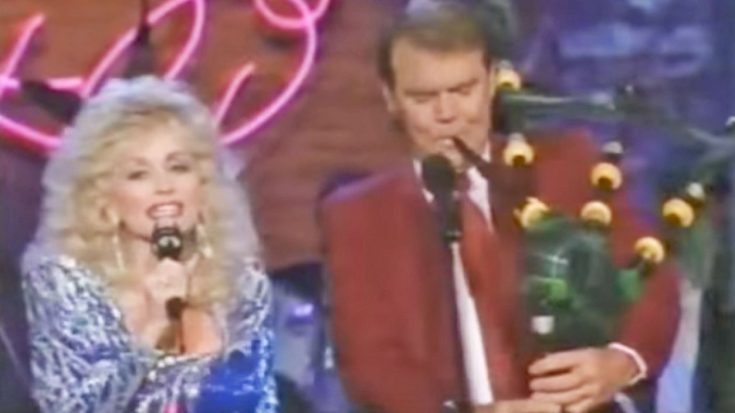 What a wonderful blast from the past! During his appearance on Dolly Parton‘s variety show, the late Glen Campbell showed off one of his lesser known musical talents, the bagpipes.

“You do something that I think is unique,” said Parton.

“You gonna tell them here?” joked Campbell to a blushing Parton.

“I used to watch you do it on your television show right out there in front of everybody,” she continued before saying, “You play bagpipes and I thought before we go into commercial we could do a little bit of ‘Amazing Grace.'”

Campbell happily obliged to Parton’s request, first singing with her and the talented A Cappella Boys before beginning to play the complicated Scottish instrument. Parton sang the emotional ballad beautifully while Campbell expertly provided musical backup.

“Amazing Grace” is a Christian hymn dating all the way back to 1779. The John Newton written song delivers a message of forgiveness and redemption, the song transcending centuries of time through its powerful sentiment.

After a six-year long battle with Alzheimer’s disease, Campbell passed away at age 81 in August 2017. While the world may no longer have the country legend with us, his legacy lives on through the music he left in his wake.

You can watch their performance of “Amazing Grace” below.