Got Game? Trace Adkins Does, And He Has The Music Video To Prove It 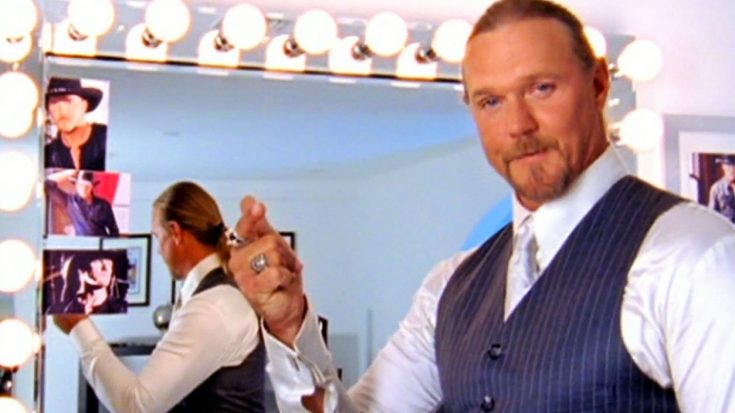 We all have that one song we like to crank up when we’re getting ready for a night out, when we’re going on a run, or any time that we need a little boost of confidence. Well if you’ve grown bored of that same old song, then Trace Adkins has the perfect one to put a little pep in your step.

Released as the first single from his second greatest hits album American Man: Greatest Hits Volume II, “I Got My Game On” was written by Jim Collins, George Teren, and Jamey Johnson. It peaked at the 34th spot on the Hot Country Songs chart following its release, and the reason for its popularity is surely due to its energetic vibe.

It’s impossible to listen to “I Got My Game On” and not feel more confident about yourself while doing so. Adkins’ narrator talks about getting all dressed up to go out and impress the ladies, something that isn’t hard to do once he gets in the right frame of mind:

“I got my groove on, I got my smooth on.
Yeah you ladies better watch out tonight.
I got my game on.”

The music video for the song was directed by Michael Salomon, and also stars country music artist and comedian Rodney Carrington. In the video, Adkins takes on the role as a “love doctor” who provides Carrington’s character with some advice. Adkins helps Carrington dress the part to impress a gal at his workplace and teaches him how to be charming.

Although Carrington’s character doesn’t quite get the grip of Adkins’ lessons, he ends up impressing the girl he admires in a surprising way. What shouldn’t come as a surprise to you after watching this music video is the fact that it won the award for Best Male Video at the CMT Music Awards in 2008. Check it out below!

Adkins also has his game on in his most recent single, “Lit,” which has been heating things up in country music. Yet another fun-loving tune along the same line as “I Got My Game On,” you know that “Lit” is a song you’re going to want to turn up as loud as you can.

You can download the song here and do just that! While you’re at it, enjoy Adkins’ lyric video for the song below.