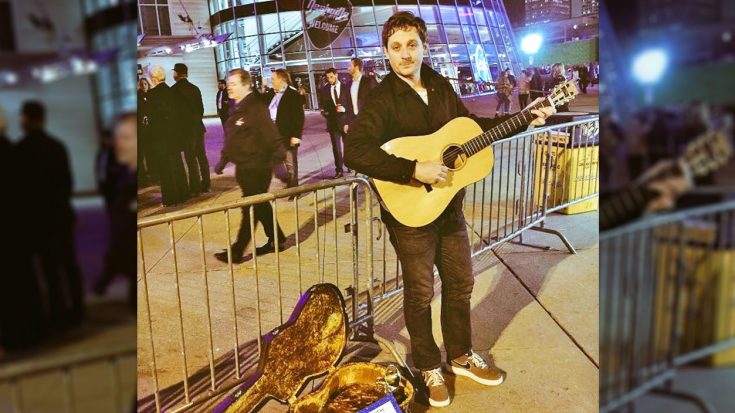 Country singer Sturgill Simpson may have won the 2017 Grammy Award for Best Country Album, but he was noticeably absent from the CMA Awards nominations.

His album A Sailor’s Guide to Earth beat out Brandy Clark, Loretta Lynn, Maren Morris, and Keith Urban’s albums at the Grammys, yet did not see his name on the 2017 CMA Awards ballot at all. In fact, he has never been nominated for a CMA Award.

He teased his “CMA performance” on his Facebook page by posting a photo outside the Bridgestone Arena, where the awards show was held, where fans were lined up to enter.

“So excited to be playing the #CMAAwards tonight!!! Gonna be doing a little busking out front….Come down and join me!” he wrote.

He held true to his promise and promptly began singing on the street, with his Grammy Award sitting in his guitar case, at 7 PM, exactly when the CMA Awards began.

Simpson had two signs leaning against his guitar case. One read, “I don’t take requests but I take questions about anything you want to talk about…because fascism sucks.”

“‘Struggling’ country singer…anything helps. (All donations go to the ACLU) God Bless America,” read the other.

He started out his Facebook live video by saying, “Finally made it guys. Big show. They were all out of seats, I couldn’t get a ticket, so I decided to come play some country music since we’re celebrating it tonight in Nashville, Tennessee.“

He also admitted that he really didn’t know anyone that was nominated except for Jason Isbell, who was not even in attendance. Then, he revealed that if he were asked to perform at the awards show, he would perform Merle Haggard’s “Are The Good Times Really Over.”

Simpson was asked if he won a CMA Award, what his acceptance speech would be, and he admits it would get political.

“Nobody needs a machine gun, coming from a guy who owns quite a few guns,” he said. “Gay people should have a right to be happy…Black people are tired of getting shot in the streets…And hegemony and fascism are alive and well in Nashville, Tennessee.”

He continued the Facebook Live for 45 minutes and answered lots of questions from fans on social media, as well as the people who showed up, and played some of his songs for them.