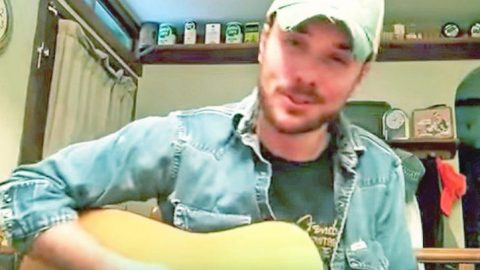 Singer-songwriter Wyatt McCubbin is definitely proving that he is someone we will have to keep our eye on. Sitting in his house with just his guitar, 22-year-old McCubbin will blow you away with his rendition of Alan Jackson’s “She’s Got The Rhythm (And I Got the Blues).”

The song was written by Jackson and his good friend Randy Travis for Jackson’s 1992 album A Lot About Livin’ (And a Little ’bout Love). It reached the No. 1 spot on the Billboard country charts and received an award in 1993 from Music City News for being one of the most performed songs of the year!

The song took the early 90s by storm, and now McCubbin is taking the Internet by storm with his version of the hit song. The 22-year-old poured his heart and soul into this cover, and it really showed.

He captured the essence of the song while making it his own, which is not an easy feat for such a known tune like “She’s Got The Rhythm.”

Watch Wyatt’s awesome cover below, and if you want to see more of him, make sure you “like” his Facebook page here.