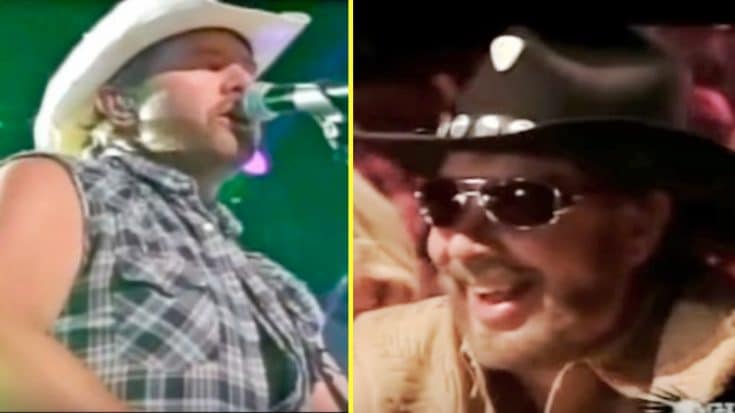 “All my rowdy friends have not settled down,” said Hank Williams Jr. during the taping of CMT Giants: Hank Williams Jr. taking place at Gibson Amphitheater in Los Angeles back in 2007. Some of the biggest names in country music came together to honor the singer who continues to be a critical player in the world of music since the release of his first single over four decades ago.

During the two-hour taping of the show, country music superstar Toby Keith paid tribute to Williams Jr. with a rowdy rendition of his iconic “A Country Boy Can Survive.” During his masterful rendition of the ’80s megahit, Williams Jr. can be seen in the audience all smiles watching Keith sing his song.

Prior to Keith taking the stage, the father-son duo, Dick and Walt Willy, who saved Williams Jr. following his life-changing accident on the Montana mountains after he fell over 500 feet down a snow-ridden mountain took the stage to speak. Dick and Walt told the story of that infamous day in history, ending their tale by saying Williams Jr. is living proof that “A Country Boy Can Survive.”

“A Country Boy Can Survive” was written and recorded by Williams Jr. in 1981, the song climbing to No.2 on the country chart. While the song never hit No.1, the iconic country song is widely considered one of his signature tunes.

You can watch Keith’s performance below.