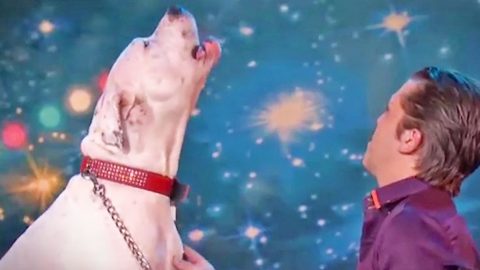 Looks like someone broke this pup’s heart! A dog as heartbroken as he is talented breaks out into a passionate rendition of Whitney Houston’s version of Dolly Parton‘s “I Will Always Love You” when the song begins playing.

The performance came about as part of the pooch’s audition for Belgium’s Got Talent. The judges struggle to hold back their laughter throughout the passionate pup’s rendition, absolutely losing it when he howls along to high notes in the chorus. From the judges’ reactions to his captivating audition, it looks like this talented canine may just have shot at becoming the Season 4 champion!

“I Will Always Love You” was originally written and recorded by the country music icon  in 1973. Parton wrote the heartbreaking ballad as a bittersweet farewell to her long time partner Porter Wagoner after making the difficult decision to pursue a career as a solo artist. Decades later in 1992, Houston took the song on with her pop rendition, going on to become one of the best-selling singles of all time.

You can watch the talented pup’s rendition of “I Will Always Love You” below!