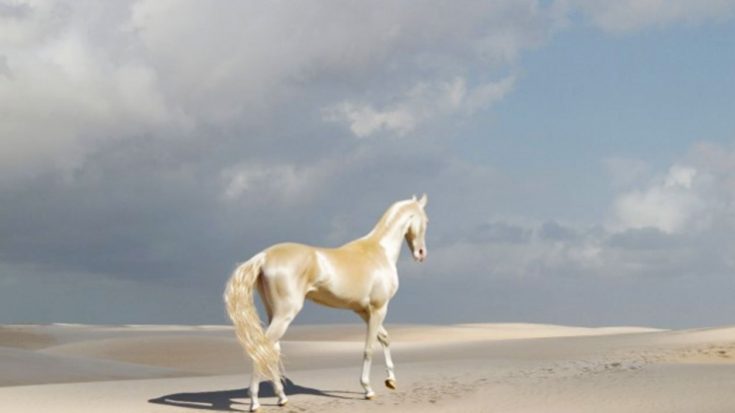 While all horses are beautiful in their own right, there is one creature that vastly outshines the rest (literally). The beauty being revered as “the most beautiful horse in the world” by anyone to lay their eyes on it, is the rare breed named the “Akhal-Teke.”

The Akhal-Teke is a horse breed originating from the small country of Turkmenistan residing in Central Asia. The rare breed is a Turkmenistan national emblem, praising the horses for their reputation of speed, endurance, intelligence and a very distinct metallic shine.There are an estimated only 6,600 Akhal-Tekes left in the world residing mainly in Turkmenistan and Russia.

Referred to often as the “Golden Horses,” several theories exist surrounding the origin of the breed, with some theories dating back thousands of years. Ancestries of the horse may date back 3,000 years and the precise ancestry remains unclear.

Akhal-Tekes are referred to as “horses from heaven” due to the unique shine radiating from their coats. The structural properties in their coats are what give their hair the glowing shine when hit by the sun, similar to the way metal reflects in the light.

What an incredible creature! You can watch the video below to learn more about the rare breed.

Akhal-Teke – The Golden HorseAhal teke is a horse breed from Turkmenistan, where they are a national emblem. They have a reputation for speed and endurance, intelligence, and a distinctive metallic sheen. The shiny coat of palominos and buckskins led to their nickname "Golden Horses".There are currently about 3,500 Akhal-Tekes in the world, mostly in Turkmenistan and Russia, although they are also found throughout Europe and North America.