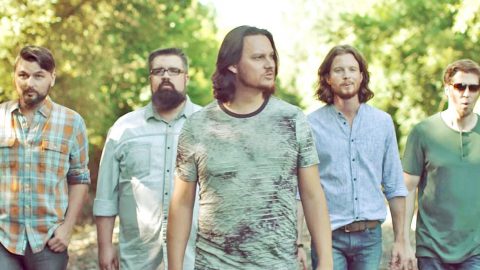 While we’re primarily used to hearing country covers from a cappella group Home Free, they have also stepped into pop from time to time. In the past, the group has covered everything from Justin Timberlake‘s “Can’t Stop the Feeling” to Andy Grammer’s “Honey I’m Good.”

The group also offered up a cover of one of the biggest pop hits of 2017. That hit is “Castle on the Hill,” which was recorded by English singer-songwriter Ed Sheeran.

Released on January 6, 2017, “Castle on the Hill” was one of the double lead singles off of Sheeran’s third studio album ÷. The song topped the charts in multiple countries, including Iceland, Scotland, and Israel. It also reached the Top 10 in countless other countries, including the U.S., the UK, and Spain.

“Castle on the Hill” has sold millions of copies worldwide, with over three million sold in the U.S. alone. As a result, it has been certified triple Platinum by the RIAA.

Home Free first covered Sheeran in 2015 when they put together a mashup of his hit song “Thinking Out Loud” and Marvin Gaye’s “Let’s Get It On.” So when they heard “Castle on the Hill,” they knew they had to do their own arrangement:

“I fell in love with this song because it paints such a beautiful picture for the listener,” Home Free’s baritone harmony singer Adam Chance told Sounds Like Nashville. “It pulls at the heartstrings and makes you nostalgic all at once. And the best part is it’s a blast to sing.”

The group certainly painted a beautiful picture in their music video for “Castle on the Hill,” which was filmed in Oregon. The video follows a young couple enjoying a passionate summer romance. Scenes of the couple are mixed with footage of the Home Free guys singing in the midst of Oregon’s natural beauty.

While the video is stunning all on its own, it’s Home Free’s singing that gives the whole thing the finishing touch. The arrangement allowed them to perfectly showcase how well they harmonize with each other. When all of them sing at once the resulting sound is beyond breathtaking.

We’ve come to expect excellent things from the Home Free guys, and they didn’t disappoint with this new cover. Tune in below to watch them offer their take on “Castle on the Hill.” You’ll be glad you did!