By Jennifer Pernicano on August 19, 2016
Advertisement 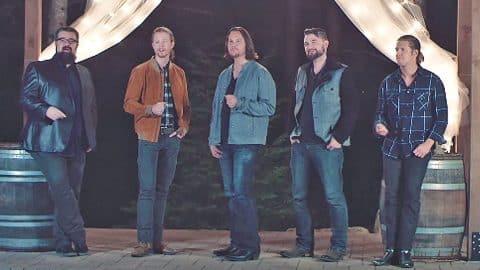 If you thought their cover of Maren Morris’ hit song “My Church” was incredible, just wait until you hear Home Free sing Thomas Rhett’s “Die A Happy Man”.

The a cappella group continues to floor us with incredible covers of our favorite country songs, but this one might just be their best.

Fans were worried when the group announced in March that founding member Chris Rupp would be leaving to pursue a solo career. They introduced us to their new member, Adam Chance, to round out their sound, but after a few music videos with the group, haven’t really featured him – until now.

The brand new music video begins with the Home Free guys’ harmonies sounding smoother than ever. Chance kicks off the song with a solo that will give you chills. His voice is so incredible, it’s no wonder they added him to the group!

The video also features bass singer Tim Foust and his real life fiancé, Jenika, spending a romantic day together that ends with a slow dance under the stars.

Foust sings, “Baby, that red dress brings me to my knees,” to Jenika as she wears a beautiful red dress. Their love for each other is so apparent and having one of the most romantic country songs intertwined is the perfect scenario.

“Die A Happy Man” is one of the most successful songs of the year. It topped the Billboard Country Airplay, Hot Country Songs, and Country Digital Songs charts and broke plenty of records and won Rhett several awards.

Home Free is sure to make Rhett proud with their version, which you will be playing over and over again, while dancing with your sweetheart.

Watch the romantic video below.